Given my druthers, I’d be two hours late to everything. I call it being on Latina time. Americans, time fascists that they are, are not amused by it. So I’ve trained myself to be on time by subterfuge against my wiliest enemy: myself.

In Latin America, no one is “on time” for anything. I put “on time” in quotes because the very notion of that sounds silly. How can life be lived by a clock? For every Latino I know who has lived at least some of their time “en nuestros paises,” if you tell someone to be at your house at 7:00 pm and they actually arrive at 7:00 pm they’re over-eager and a little gauche. Don’t they have a life?, the hostess wonders.

In Argentina, party guests arrive in a swirl of crisis and intrigue. The car again! That man! Can you believe: the store, these shoes, the oven? They thrust a container of food at you, breathless, like they just repossessed it from ninjas, and tell you they’re sorry but… What can you do? Time is a mutable trickster. Then everybody gets a glass of homemade red wine and the story of the crisis is recounted. Crisis oneupsmanship can entertain you through a good first half of a party.

The first time I hosted my own party was for my 21st birthday. I invited my friends, many Latino, but some American. I lived in a tiny, illegal studio across the street from a diner and down the block from the little theater where my Catholic school used to take us to watch the Passion Play. The apartment had a makeshift shower right next to the stove in the galley kitchen. I was in that shower, like any good hostess would be, at 7:00 pm when I’d told my guests the party would start. Of course no one would actually show up at that time. Right? Wrong. Summoned by the bell, I ran to the front door in a towel to find my high school English teacher holding a gift. (Yes, I loved literature enough that I stayed friends with my high school English teacher). She made the taco meat and greeted guests while I got ready by my little twin bed, in view of arriving American friends. My Latino friends had the sense to arrive at 9:00.

I learned a lesson about the perception of time that day. As my acquaintance pool shifted from predominantly Latino to predominantly American and as my Latino friends entered the corporate world and its imagination-less timeliness, I learned to mean 7:00 when I said 7:00. But the yearning to be free of time remains.

In order to find some modest success in the Anglo world, I taught myself the tricks. I tell myself it will take an hour longer that it could take any human to arrive anywhere. (Magically, that gets me there right on time). I focus on departure time instead of intended arrival time. If hair preparation is involved, I wash it the night before and start beautifying what feels like ludicrously early. It is a game I play, one in which I imagine I’m going to some other thing before the thing to which I’m actually going. And I am. It’s called getting there. On Latina time, getting there is a place of magic and mystery for which no mere mortal can plan.

Tardiness is a condition of perpetual optimism. I know it took an hour and twenty minutes to get to work yesterday. But today! Today the bus will be timely. I’ll walk faster. I won’t stop. The streets will be clearer. The holiday, the rain, the season, the lack of presidential visit snarling up traffic will make it all different. Today. Of course there is time to make eggs. Of course.

Being late also involves the deepest expression of selfhood, the right to be where one wants to be when one wants to be there. If you can’t tell your boss to take this job and shove it, at least you can roll in a half hour late. That feeling is not exclusively a Latino sentiment. As Marilyn Monroe once said, “I am invariably late for appointments – sometimes as much as two hours. I’ve tried to change my ways but the things that make me late are too strong, and too pleasing.” (And, of course, not all Latinos are on “Latino” time).

Like many ongoing experiences of the first generation immigrant, I will continue to figure out American time. But in my heart I am always on Latina time. 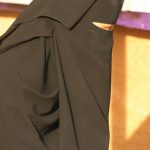