The other day, I watched a documentary series, The Preppy Murder: Death in Central Park on AMC. If you are younger than I am, or didn’t grow up in New York (so… like most people), a quick recap: in August of 1986, an eighteen-year-old woman named Jennifer Levin was found murdered in Central Park. It soon emerged that the suspect was nineteen-year-old Robert Chambers.

The story had so many elements that captivated people. It took place in the rarified air of Upper East Side Manhattan, among kids with their daddy’s Amex tucked in their expensive wallets. (Jennifer lived in Soho, but moved with the Upper East Side crowd). There was sex, it seemed. Jennifer’s body had been found exposed, as if after a sexual encounter. There was youth. There was beauty. The suspected perpetrator, Robert Chambers, looked more like a male model than most people’s ideas of a cold-blooded killer. It was a nationwide story. In New York, it was an obsession.

I grew up on the outskirts of New York in the unremarkable parts of Hudson County, long before its gentrification. In the heady pre-cell-phone teen years, heading into the city was as easy as an invented trip to the library and a ticket on the Path train. And head into the city we did. We mostly hung around the Village, since it offered a quick trip back to the Jersey side, but we considered New York our playground. It was the days of lax interest in IDs, if you were young and cute and female. At night, we invented a visit to a friend’s house, or a tame high school dance, put on our cheap stretchy black skirts and our hooker boots and went into New York dance clubs instead, waiting in the freezing cold to get picked to go inside. To get home, we’d wait in the drug-infested Port Authority at 2:00 or 3:00 a.m. for a bus that took its sweet time, and regarded the schedule as a mere suggestion. I got my first marriage proposal from a homeless man who liked my legs enough to ask me to take the plunge in the middle of the night at the Port Authority Bus Terminal.

This was New York before the Disney-fication of Times Square, before Giuliani, in his previous act, got rid of squeegie guys and implemented the now-controversial Broken Windows theory. In other words, in roaming as freely as we did in New York, we took real risks. We behaved, from my current vantage point as middle-aged mom, totally foolishly. We had fun, and lived free, and never imagined there might be consequences.

I was two years younger than Jennifer Levin. She seemed to have even more reason to feel like she could roam free. She was a week away from going to college, whereas I had no discernible path to it due to my economic woes and my immigration status. She had gone to private school, and moved with the well-off. When she saw Robert Chambers at the Upper East Side bar she’d been to before, she was not meeting a stranger. They’d been intimate before. So she went to the park with him. Only one of them came out alive.

The Jennifer Levin case is notable because, among other things, of the defense that was used. Chambers’ defense team basically did their best to slut-shame Jennifer Levin. What kind of woman goes into a park with a man at night? She was alleged to be the sexual aggressor. What kind of woman wants it? What kind of woman does those things? There was chatter of a sex diary (in fact, it was an appointment book she kept in her family’s kitchen, which was deemed inadmissable) and the titillating use of the term “rough sex.” What did that even mean?

At sixteen, despite the over-the-knee brown leather “hooker” boots I’d bought myself with the money I made delivering newspapers, I was, at heart, a Catholic school girl. I, along with most of my friends, was a mix of burgeoning sexuality (the aforementioned short skirts, and the delight in seeing boys’ eyes wander across my body), and prude. I’d be a virgin until I was nineteen. I had listened to, and internalized, many a harangue on modesty and virtue from the nuns who ran my high school.

So when I heard about Jennifer Levin, I hate to say it, but I thought it too: what was she thinking? Even though what she had done was not that far from what I was willing to do, I didn’t take her side. Not then. Not yet. If the headline had been, instead, “Girl dead in Port Authority after leaving club at 3:00 a.m.” what would they have said about me? I failed to draw those parallels, instead believing the narrative societies tell to keep women in their places: if she’d been a “good girl,” maybe this wouldn’t have happened.

I’m sorry about that, now. I’d learn soon enough. The Central Park jogger was attacked slightly less than three years later, in April of 1989. By then I’d moved out of my parents’ house and was supporting myself by working at a New York City law firm for two hundred dollars a week. I was the age Jennifer was when she died, shy of my nineteenth birthday. When one of the lawyers said that if the jogger hadn’t been out that late at night in the park, maybe she wouldn’t have been attacked, I got into a heated argument with him. I wish I’d known enough to stick up that way for Jennifer.

One of my favorite things about getting older is to see not just that I have longer friendships and deeper ties, but also evolving relationships with the stories of my life. When Jennifer Levin was killed, I let society tell me what to think of her and, by extension, myself. I let outside forces tell me what a “good girl” did and did not do. I bought into the boxes put around me and all women. Be virtuous. Smile more. Trust the handsome man. Watch what you wear. Don’t want it. Don’t go into the park at night.

But I am ready for a new world. A world in which women roam free and men are held accountable. A world in which instead of teaching our daughters to be careful, we teach our sons not to harm women. A world in which Jennifer Levin is remembered as a vibrant young woman filled with zest for living, who had her right to walk free cruelly cut short by a monster, no matter how pretty his mask.

Thank you, Jennifer. I am so sorry that we lost you. 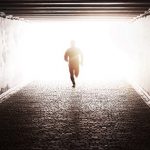 What’s an adventure you want to have?Writing
The Secret Side of Empty on sale for one week onlyWriting