Robin Thicke’s Blurred Lines is an insanely catchy song that could wake me up from a coma. Blasting on my iPhone on a sunny morning in the new local park when I’m doing my 5K training, it uplifts me and gets me past my natural resistance to movement. It’s got just enough of a sexy vibe to remind me I’m a physical being. It says something about “wanting it,” which I often do, and being a “good girl,” which I’d say I am. But, honestly, besides, “You know you want it but you’re a good girl,” I had no idea what the heck the song said. I can’t make out most lyrics without Googling them. I always chalk it up to English being the second language I learned. The words all blur together.

Then Miley Cyrus came along with her tongue-wagging, plastic-underwear, ridiculous show at the VMAs and I felt compelled to Google the lyrics. Ick. I wish I hadn’t. Read the full lyrics here).  Misogynist disregard for an object’s feelings masquerading as female liberation. It always troubles me when a man tries to tell me how much I “want it” when what he really means is how much he wants it.

Miley Cyrus is getting a lot of heat for her cringe-worthy, hypersexualized performance at the VMAs. As the mom of a girl only 7 years younger, I just wish I could give Miley a big hug and wrap a robe around her. She’s trying to get taken seriously as something more than the little girl who rose to fame as Hannah Montana. She is not crazy in assuming that in our society being a grown woman means being a sexual object. Try to think of a single female recording artist with a Top 40 hit you haven’t seen in her underwear. (I can only think of Adele, a formidable talent who still doesn’t escape objectification of her body when she’s excused from the naked romping by being “the fat girl”). Miley is 20 and ready to rebel. I remember being that age and feeling that way. I was lucky enough to not have creepy, older handlers around me egging me on or maybe there would be some footage of me dancing around in plastic underwear, my hoo-ha seriously lacking oxygen.

My issue with Miley’s performance is not that she went there, but that she’s getting pilloried for it the way she is. As a society we put heavy pressure on women to be a body first, and not just any body, but an underfed, big-boobed, airbrushed body, ideally. I have yet to meet the woman who hasn’t stood in front of a mirror in her underwear and assessed herself negatively against the barrage of sexualized, fetishized images we’re each bombarded with daily. Many of us learn to deal with it. Some of us, young and hungry for approval, convince ourselves that it’s edgy to romp mostly naked on a stage, butt cheeks to the wind.

The backlash against the VMA performance is aimed at Miley, but no one is talking about the fact that some of the worst of it came while she was reacting to a song with lyrics like, “So hit me up when you passing through.  I’ll give you something big enough to tear your ass in two.” (Although, yes, there was that bizarre bear thing. I’m hoping someone cooler than I am will explain the underground drug references there).

I feel for Miley. And I like Blurred Lines a whole lot less now. It used to be a fun, peppy tune I could use to put a bounce in my step. I wonder if I’ll be able to do that now that I realize that the line it’s blurring is the one of female dignity. Put some clothes on, Miley. I don’t even remember your voice. 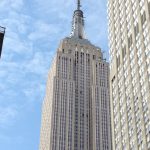