I am not a fan of parent/teacher conference night.  At my kids’ school it is a mad scramble.  Add other parents and, well, it’s the Hunger Games.

Here’s how it works.  You sign up for ten-minute slots of time with each of five “major subject” teachers (ten for me, since I have both kids in the same school).  When you arrive you find an unmanned desk with a map of the school and an alphabetical list of every one of the 40+ teachers, plus their room locations.  Although this is my daughter’s third year there, I still have no idea where I’m going in the four-level, labyrinthine layout of a building that has had additions pop up all over it like mushrooms.  Malevolent, cinder-block mushrooms that I think might have been designed with several wormholes and at least one staircase to nowhere.  Oh, and elevators that only work if you have a key.

It’s off to the races.

You get ten minutes with each teacher.  That includes transit time.  Because I was covering two students I found myself sprinting from the eighth grade wing to the seventh grade area and back again, going up staircases to that ended inexplicable before the last floor and bumping into other equally-confused parents from town.

Mercifully, I had a ten minute break before my appointment with my daughter’s math teacher.  They are teaching math differently this year in the eighth grade (thank you, Common Core) so it was important to me that I be on time for that one.  I arrived at 7:25 for a 7:40 appointment.  I would have only ten minutes to understand why my daughter, normally at the top of her advanced-placement math class, was suddenly getting less-than-stellar math grades.

When I arrived, a couple was already inside.  Their daughter is in the same grade as mine and I know them in passing from town.  I know (and adore) other members of their family much better, but not this particular branch of the clan.  Still, they’re acquaintances and I waved at them and sat in the small student-sized chair provided outside.

7:30.  At this point, the couple’s 7:20 appointment would be over, but they carried on talking.  Since it seemed that the teacher didn’t have a 7:30 appointment, it was fine if they wanted to get a little longer than their alloted ten minutes.  I heard laughter and what was clearly chit-chat.  And waited.  The teacher’s 7:50 appointment arrived and sat down beside me to wait.

7:40.  More chit-chat from inside the room.  Now it’s my appointment time and they’ve been in there since before I arrived at 7:25.  No signs of letting up.

It is now I remember that my daughter came home last year saying, “Mrs. Entitled (name changed to protect the guilty) told me I didn’t look nearly as fat as I used to last year.”  Now it’s the Hunger Games for real.

Mrs. Entitled is shocked that I’ve pointed out that she’s gone over her allotted time.  Shocked.  She sputters, “Well, we have a 7:50 as well and everyone’s late and…”  Defensive and nasty.  Not at all apologetic or even acknowledging that they’ve eaten up half of my time so that they could get double time and a half.

I want to tell her, no, not everyone is late.  Even when I’ve arrived at a room late because I was lost, I have cut my visit short so as not to go over my time.  Because, you know, other humans.  I’m aware they exist.

And I am reminded that the worst part of Parent/Teacher night is discovering that so many of my kids’ schoolmates aren’t entitled little brats because they’re middle-schoolers after all.  It appears to be a hereditary condition.

Boy, am I glad I got that out.  That’s been making me cranky.  Inconsiderate people just blow my mind.
Thanks for reading. 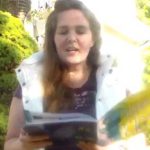 (VIDEO) The Secret Side of Empty in Publisher’s CatalogVideos, What's New

Why I love witchesWhat's New