You know how marriage is between one man and one woman? And how sometimes it’s between that same woman and a different man? And, then, how it can be between yet again that woman and a third man? And then by that woman and the second man again? And how sometimes, amidst all this, that woman can have a baby without being married to anyone? Because… God? Turns out that if you’re Kim Davis, the Kentucky clerk denying gay couples marriages licenses, these things can all be true for you, but you can still have the audacity to disregard the law and your duties because you’re adhering to a religious mandate you did not follow most of your adult life.

Yes, folks, according to NBC News, she’s been married four times and divorced three. And had children out of wedlock. But since she became a born-again Christian four years ago, she can’t give marriage licenses to gay couples because that makes Jesus weep.

I am not one to shame anyone for marrying more than once. Glad that she lives in a nation where she gets to make those very personal choices for herself. I’m even glad she gets to make the choice to “find God,” and change her personal philosophy. Awesome. Less awesome is that now that she’s changed her own mind about how she personally wants to live, she thinks that means that she can pick and choose what part of her sworn duties to perform.

Here’s the thing about this construct we call “Biblical” marriage. It’s a fantasy. Coupling up is as old as humanity itself. Marriage as we know it is not. In the Bible, marriage meant something different than what people are trying to represent today. (And “til death do us part” has always been more of a wish than an absolute reality, especially with rising life expectancy). In the Bible, marriage could be between a man and several women. A rape victim had to marry her attacker (also, he could never divorce her.  Happy times. Deuteronomy 22:28-29). A slave owner could force a slave to marry another slave. “If his master gives him a wife and she bears him sons or daughters, the woman and her children shall belong to her master, and only the man shall go free.” Exodus 21:4 (Yay, misoginy and slave owning!).  A man had to marry his dead brother’s widow. If we’re looking for what we now consider “traditional” morality, why cherry pick the comments about homosexuals and ignore all the other awful things that reflect the mores of the Bronze Age, when the Bible was written? This is not to disrespect the faith of many people who find comfort in many of the Bible’s better teachings and stories. This is to say that it’s a personal philosophy and has no place in directing legal decisions.

Although we try to fluff it up with romance, marriage today is a legal arrangement that creates financial and child-rearing obligations, rights to next-of-kinship and inheritance benefits upon death. Gay people are looking for equal protection under the law in those areas. The Supreme Court says they’re entitled to that. Kim Davis taking it upon herself to impose her flawed logic borne of her personal (and recently acquired) morality should lead to her immediate dismissal for dereliction of duty. Come on, Rowan County, Kentucky. Do the right thing. 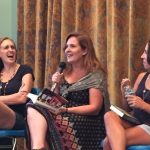