By Maria E. Andreu
Posted December 28, 2018
In Writing
Another trip around the sun2018-12-282018-12-28https://mariaeandreu.com/wp-content/uploads/2018/02/logo-4-white-letters-with-transparent-background-wider.pngMaria E. Andreuhttps://mariaeandreu.com/wp-content/uploads/2018/02/logo-4-white-letters-with-transparent-background-wider.png200px200px

Those of us with several trips around the sun under our belts, and a commitment to leading purposeful lives, tend to have a long history with New Year’s resolutions. I’ve written several pieces about them just on this blog, feeling compelled to acknowledge them and sometimes to repudiate them. You can’t know where you’re going unless you aim for it. Resolutions are futile. The start of a new year is a construct, no more important than the second Tuesday in August.

My love for resolutions has waxed and waned, but I’ve found them impossible to ignore. So I make them. I used to believe in making them public, but find it less important than I used to. (If you’re curious, though, I’ll list them for you below).

Most importantly, though, I’ve begun to see that their limitation is in how transactional they are. Write a book. Get an agent. While these finite goals are important, they’re not really what lead to success, let alone her far more attractive cousin: contentment. Real change comes, for me, from identifying small habits that improve my life in some way, and then bringing myself back to them again and again, like a meditation.

An example: gratitude. I have a not-so-good tendency to focus on what I lack and totally ignore what I have. And I have a lot. The simple act of noticing that lot can turn a bad day into a good one. I have the love I’ve always said I yearned for, security, professional satisfaction. But since this gratitude does not come naturally to me, finding my way to it is an ongoing process, a thing I need to remind myself of again and again, and even more so when I’m sad. So while getting a new book deal is a great goal, and a worthy New Year’s resolution, a renewed commitment to noticing everything I’ve already achieved is far more likely to make me happy.

Another habit I want to work on is that of unstacking demands on myself. For example, I often set a word count target for myself. (Say 1,000, which I can get to in under an hour and feels eminently doable). But when I miss the 1,000, the next day I tell myself I need to do 2,000 to catch up, and so on until I am crushed by the weight of how far behind I am, and do nothing but stare at the T.V. and feel like I’ll never write again. On days I allow myself to just get back into it with 1,000, without the “debt” from the day before, I am looser, happier, and less likely to shirk writing. So, while a word count goal is good, cultivating the habit of self-acceptance and doing what I can is far more likely to get to me to the page, never mind make me feel content.

So, resolve away, my darlings. I will, too. But you know the formula already, and it’s often quieter than the grand plans and showy lists: be the best you you can be, as often as you can, and give yourself a good dose of kindness every day. You’ve got this already, whether it gets put on the list or not.

There’s so much else, of course, publishing goals and financial goals and desires for long weekends and more friend time. But I want a nice, neat list l I can look at next year and say, “I did that.” It’s a habit of mine. 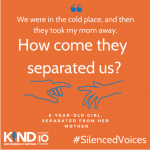 This Christmas, remember the kidsWriting
Will I see you there?Writing