There’s an old Twilight Zone episode I always think about, the story of a curmudgeonly guy who wants nothing more than to be left alone to read all the time. It was supposed to be a cautionary tale about how we need other people (and of course we do!), but I always remember thinking… that sounds kind of awesome, actually. So many books, so little time.

How do we pick?

Well, cover blurbs are cool, and great reviews are awesome, but sometimes I think it’s great to get to know the author as well. My friend, Jeffry W. Johnston, just had a book come out last week, and in anticipation of his launch, I asked him to answer a few questions so I could introduce him to regular readers of this blog.  The book is FOLLOWING, a mystery which Booklist calls, “A slow-burn thriller that veers in surprising directions, with a final twist no one will see coming.” It’s funny, because Jeff is just a sweetheart of a man, always just hanging out with his wife and kids and being all-around nice, but his writing can be… dark. So where does that come from? Read on below to hear his thoughts on that and more.

You can check FOLLOWING out on Amazon, Barnes and Noble or Indiebound (support your local indie!), or look for it at your public library. If they don’t have it, ask for it!

In the teaser to this interview, I mentioned that you’re one of the nicest guys I know, but your writing can be dark. Where do you think some of the darker things you like to write come from?

Well, thank you very much, Maria. I do try to be nice. 😊 What can I say, I’ve always been attracted to dark, edgy fiction, I’m not exactly sure why. I think we all have a dark side and a light or positive side. For me, I guess, writing is a safe way to access the more ominous side. I started out by writing horror fiction—I’ve always been attracted to horror movies, novels, TV shows—and most of the short stories I’ve published are in the horror genre (though it’s been a long time since I’ve written in the horror genre or the short story form). I even tried writing horror novels. I wrote three, but none of them went anywhere. When I started writing young adult fiction for teens, I was glad to see there was a place for darker, edgy fiction and, so, my attraction to exploring the dark side has continued.

Where do some of the darker ideas come from? They come from so many sources: personal experiences, my observations on what’s going on around me, and other things, I’m sure. As an example: the idea for FRAGMENTS, my first novel, came was ignited by an actual car accident. I was so moved and saddened by what happened that I started writing FRAGMENTS within 2-3 days. But while a car accident is central to the story, the novel ended up going in a totally different direction I didn’t initially foresee, and I ended up incorporating other ideas and themes that had been floating in my head for a long time.

One thing I did for THE TRUTH was use my teenage son (well, he was a teenager at the time) as the model for the main character’s younger brother. I thought by doing this, the writing would feel more personal to me and, therefore, more affective. Ultimately, while there are similarities, the character also ended up being quite different in other ways.

Overall, I’ve always been attracted to the idea of how people deal with darkness in their lives. I’m also big on characters seeking redemption.

How do you get into a character’s head?

I can’t say there is any particular method I use. I’m not the kind of writer who spends time writing extensive bios for each of my characters. I always have a “Notes” folder in my computer for the novel I’m working on, and I may start with a few (often vague) notes about characters before I start writing the novel. But a lot of what and who a character is, or becomes, happens during the writing process. If something strikes me, I’ll make a note and go on, correcting any contradictions or making any adjustments in the revision process.

Sometimes a character will have a lot of myself in him and that’s what I’ll use as a launching point. But the character will always change from my initial vision of him or her as my writing progresses.

What’s one of your favorite experiences as an author so far? Is it living up to what you dreamed being a writer would be?

I’m not sure what I initially dreamed it would be like. As a kid, I just liked to write and learned I had somewhat of a flare for it. In 6th grade, I discovered theater, and for a long time my big dream was of wanting to be an actor. I went so far as getting a college degree in theater and speech and pursuing a career for about three years before going back and committing to writing. So, I guess I’ve always had a desire to put myself out there, as it were.

My favorite experiences as a writer are when I hear from teens who have read my novel and tell me how it affected them. I’m especially pleased when I get an email that says, “I don’t like to read a lot, but I enjoyed your novel.” Teens are a great audience!

You’ve got a book coming out in a few days (edited to add: it’s out now! It was still a few days off when we did the interview). Tell us a little bit about it. How did you get the idea for the story? In what ways did the story or the characters surprise you as you were writing it? 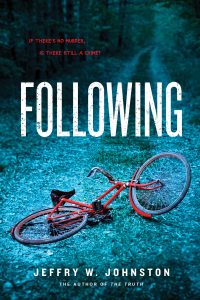 It’s called FOLLOWING and is about a teenage boy who has a rather unhealthy urge to follow people. It stems from his parents’ death and how he views his part in it (that, of course, is revealed in the novel). While following one of his high school’s star athletes, he thinks he witnesses a murder. But when the police show up (after he makes an anonymous 911 call), there is no body or sign that anything happened. What’s going on? Did he witness a murder or not? Or is something else going on?

The inspiration for it comes from one of my favorite movies: Alfred Hitchcock’s REAR WINDOW. In the movie, Jimmy Stewart plays a photojournalist who watches his neighbors from his apartment window while he recuperates from a broken leg and thinks he might have seen something bad go down. I wanted to see if I could write a novel using that theme. The result? FOLLOWING.

Character always surprise me, and I love it when they do. If they don’t at some point, it probably means I’m doing something wrong or I’m not paying attention enough to what my story is telling me. I don’t want to say how my characters surprised me in my latest novel, because I don’t want to give away twists or surprises. But, yes, some of my characters in FOLLOWING did, if not at least surprise me, excited me with the way they developed and grew. 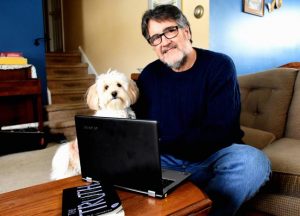 Jeffry W. Johnston’s first two novels FRAGMENTS and THE TRUTH were both YALSA Quick Picks for Reluctant Young Adult Reader selections. FRAGMENTS was also an Edgar nominee for Best Young Adult Novel and THE TRUTH was an In the Margins top 10 award winner. Besides being a writer, Jeff has been a day care teacher, nanny, theatre reviewer, movie critic, telemarketer, and bill collector. His favorite movies are IT’S A WONDERFUL LIFE, TO KILL A MOCKINGBIRD, and ON THE WATERFRONT. His favorite TV show of all time is MASH and his longest binge was of the first 11 seasons of CRIMINAL MINDS. He also sings and plays guitar in a band, and writes music.

This website uses cookies to improve your experience while you navigate through the website. Out of these cookies, the cookies that are categorized as necessary are stored on your browser as they are essential for the working of basic functionalities of the website. We also use third-party cookies that help us analyze and understand how you use this website. These cookies will be stored in your browser only with your consent. You also have the option to opt-out of these cookies. But opting out of some of these cookies may have an effect on your browsing experience.
Necessary Always Enabled
Necessary cookies are absolutely essential for the website to function properly. This category only includes cookies that ensures basic functionalities and security features of the website. These cookies do not store any personal information.
Non-necessary
Any cookies that may not be particularly necessary for the website to function and is used specifically to collect user personal data via analytics, ads, other embedded contents are termed as non-necessary cookies. It is mandatory to procure user consent prior to running these cookies on your website.
SAVE & ACCEPT
Guys! Publishing news!!Writing
Guess what…Writing