This past (long) weekend, I took a whirlwind trip to Atlanta. It was to a by-invitation-only gathering of published writers, and I had no idea what to expect. I’d made the decision to go during the shutdown, and the thought of standing in a three-hour security line at the airport made me queasy (I’m a nervous flyer/security traverser under the best of circumstances), so I decided to drive. That’s around a thirteen hour drive each way. On the way down I did it in two legs, stopping at a most charming AirBNB overnight (good thing, too, because I hit obscene traffic on 81 South, and an expected six-hour drive turned into ten).

All this prologue to say I had a LOT of time for Audible books. I listened to several, but the most defining one of the trip, for me, was SHOE DOG by Phil Knight, founder of Nike. It had been suggested to me several times, and some of the reviews I read mentioned it stands out among business memoirs. Sure, there’s the “aww shucks” humble beginning, the recounting of early shenanigans (So. Much. Drinking). But early on, he talks about wondering what he wanted to be and, as as avid reader, considers being a novelist. It shows in the writing. Beyond style, though, it’s a screed about perseverance, about pushing forward even when you’re not sure what the outcome will be. It was an apt thing to listen to on a drive into the unknown.

Chances are you don’t want to be a sneaker mogul. I don’t either. But I do want to live my life dedicated to pursuing the things that really matter: love, and, for me, storytelling. The older I get, the clearer my pursuit gets. Phil Knight tells a singular tale about chasing a passion, about learning lessons (sometimes the hard way) but pushing through nonetheless. From not taking a salary and keeping a day job for five years as he got the company off the ground, to currently being worth billions of dollars, it’s a riveting tale, not least because it’s not at all about making money. It’s about devoting yourself to a dream. It’s about excellence. This old “shoe dog” (apparently there’s a term for it, because there is a subset of people out there who are obsessed with getting shoes “right”) gave his life greater purpose, and invites us each to do the same. Shoes aren’t lofty in and of themselves, but when you tell yourself you’re helping people on their journey, suddenly they take on new meaning.

Perhaps that was my biggest takeaway. Things have the meaning we give them. He boils down his journey to the basics: the things he cared about, the energy with which he pursued his dream, and the people he loved and held onto along the way. Phil was a great companion for me on my drive down into the unknown, to go meet a bunch of strangers who share my singular, totally irrational passion for stories. When I arrived, I felt ready for anything, and the meeting turned out to be life-changing. Maybe Phil could be a good companion to you on your unique journey.

This website uses cookies to improve your experience while you navigate through the website. Out of these cookies, the cookies that are categorized as necessary are stored on your browser as they are essential for the working of basic functionalities of the website. We also use third-party cookies that help us analyze and understand how you use this website. These cookies will be stored in your browser only with your consent. You also have the option to opt-out of these cookies. But opting out of some of these cookies may have an effect on your browsing experience.
Necessary Always Enabled
Necessary cookies are absolutely essential for the website to function properly. This category only includes cookies that ensures basic functionalities and security features of the website. These cookies do not store any personal information.
Non-necessary
Any cookies that may not be particularly necessary for the website to function and is used specifically to collect user personal data via analytics, ads, other embedded contents are termed as non-necessary cookies. It is mandatory to procure user consent prior to running these cookies on your website.
SAVE & ACCEPT
A short storyWriting 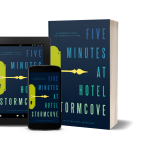