You may remember me gushing about a writing workshop I went to in May with the inimitable Laura Ruby and Anne Ursu. It was a writer’s dream for so many reasons: it was at the fantastic Highlights Foundation retreat center, it was a full novel workshop, meaning I had the unbelievable privilege of having my whole novel read and critiqued by a Printz-Award-winning writing superstar (and the partial read and critiqued by yet more superstars), the class was full of talented and fun people, and the group was small enough that we got a generous amount of individual attention.

But possibly best of all was the freedom to play the workshop gave me. I am not good at being “wrong.” I am a perfectionist, and I’m hard on myself, so I try desperately hard to get things right. But, alas, creativity requires that one take chances, and it’s hard to do that when one is trying to go around looking like one’s got everything under control.

On the last day, I got sick enough that I had to go to my cabin and put my head down while the others did the final assignment. This week, Anne reminded me I’d skipped out on it, so I went ahead and handed in my homework late.

The assignment? Rewrite the beginning of my book… badly. Write badly on purpose? Yikes. I was terrified of it. But giving myself permission to just do that made me fall in love with my work in progress all over again. A little context: the idea is that there is an island that floats two miles above the surface of the planet. It was settled one-hundred and twenty-seven years ago, and it’s become something of a tourist attraction (in the artificial way a “Wild West” town might capitalize on its history). Except… the island is losing lift, and may soon crash to the ground. Why is it falling? And how do they stop catastrophe? Our main character, Emma, works to keep the show going while racing to save the home she loves. But she’s not prepared for the discoveries she makes about greed and the underbelly of how everything is actually run.

Oh, and two possible love interests and a bit of kissing inside a magical fire that doesn’t burn.

Anyway, the bad beginning (not the real beginning!):

Emma Ravarian stepped out of her shop and thought to herself, “My boobs sure are perky.” Sure, sixteen-year-old boobs are often perky, but Emma’s glowed with the pertness of a thousand ripe melons. But not too ripe. It’s why Lux, the lecherous boy next door, often letched at her and had no redeeming qualities whatsoever, because Emma’s boobs were perky, but he should also notice that she had Ideas, and Was Going to Save Everything. But not just yet, because here in this first scene she thought everything was fine and she had her own undefined problems.

She bounced over to Lux’s place, in her sparkly skintight bodysuit (because this part didn’t need to be made worse, as it was already pretty bad), and, really, everyone understood she was a hooker*. But a hooker with a heart of gold! On an island floating in thin air two miles above the surface of the planet, which was also falling.

Yes, reader, Emma and Lux’s island was falling, and corporate greed and class struggles, but did I mention Emma’s hair is also sort of red? Because it’s not a YA book without a red-haired heroine.

A ship floated up and don’t worry too much about the science, okay? You won’t have to believe in sprites or demons that solidify out of smoke, just this one floating island thing. Everything else is normal. Humans. Humans who have lungs, measure things in feet, although this is not anywhere you’ve ever heard of, but everyone’s got feet, right? There’s a boy who is one of the visitors getting off the ship (the whole reason this island is interesting is because it’s a tourist attraction, like a floating Universal Studios Tour. Also: I mentioned it floats, right?). Because we describe the boy more than most you’ll think he’s toast, but he’s not. His mother is, because isn’t actually harder to be motherless than splattered on the Down Below?

His mother falls through a hole in the island down to her death, but not until chapter two, and that’s not at all a pacing issue.

*This is an inside joke. I assure you there are no hookers in my young adult novel. Some of the feedback I got was that I mentioned single men being on the trip, and a tourist attraction that used to be a saloon back in the island’s rough-and-tumble early days, and conclusions were drawn. No one was more surprised than I was, my friend. I had no idea my main character was putting out hookery vibes. The passage has since been revised, and the whole novel has been edited thanks to Anne and Laura’s expert feedback (and the class’ notes… and my writing group’s notes…) but now every time the participants of the workshop and I write to each other, we begin with, “Hello, Sparkle Hookers.”

Why do I share my own bad beginning? Just to remind you to play, and not take yourself so seriously. And also because I hope it gave you a giggle. 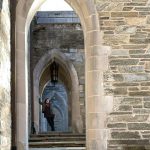 When all things are possible and nothing is safeWriting 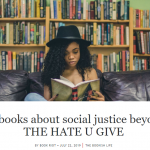 YA Books About Social JusticeImmigration, Writing