There’s a great, big spider that’s built a web outside my living room window. At first, I observed her alone. She built an exquisite web to span the entire width of the glass – three feet maybe – and stood watch perfectly in its center. My mom came to see my daughter off to college on Saturday, turned around to look out the window at some point, and screeched. “I could go outside and get rid of it,” my daughter offered helpfully. “No,” I replied, without further explanation.

We packed my daughter off, plants and crystals, less clothes than her freshman year, lesson learned. We left behind the tea caddy and the fridge on which she’d carefully painted her rendition of Starry Night. We unpacked her two hours away like pros. She cried when I left. I held my tears for the drive home.

I made the mistake of having two glasses of wine back home that night, my first in several months, and I passed out like a college freshman at her first frat party. The days of being the instigator, the one who could drink anyone under the table – the days of being the age my kids are now – are far behind. The rest of the bottle still sits on the counter all these days later, where it will sit until I finally pour it down the drain.

Sunday was lost in an empty nest hangover, except for a run to Whole Foods for foods the kids would never eat for dinner: duck and all the ingredients for dijon mustard brussels sprouts, nectarines (my favorite), instead of peaches (theirs). I tried to hold the freedom of food choice. Monday, Labor Day, my skin itching with freedom, I drove to the Village, my favorite part of New York from my teenage years. The city was empty for the holiday, rainy, and I found parking in front of my favorite notebook shop, Goods for the Study. I bought an overpriced leather-covered travel notebook, and imagined the field notes I’d fill it with, far away. Freedom. The open road. When I crossed the bridge back into New Jersey I still felt no call to home, so I went somewhere else instead. And then somewhere else after that.

Finally, I came home and filled a sheet with wishlist items: the titles of all the book ideas I want to write. That day-long welding class in Brooklyn I thought would keep me away from them for too long so I never signed up for it. The painting class I’ve been meaning to take weekday evenings. Whenever the choice was them or somewhere else, I always wanted to choose them, even if “them” meant only the brief chat when they came down for a peach. But now, with each of us in a different state, I want places to go. It is not an entirely unpleasant feeling. It feels a little like discovering a box you thought you’d long lost, with poems you’d forgotten you’d written, but which still ring true. Before I had them, I always wanted to be out. I thought I’d changed. Turns out that part of me had only been in a box somewhere.

I watched the spider. In the days since I’d last seen her, she’d fortified her web. Twice she reacted in a flash when a fly grazed her web, spinning silk around them impossibly fast, doing her work. I tried to imagine her as a messenger of some sort, and I Googled the meaning of spiders. Professor Google offered the following: “What the spider symbolism wants you to know is that you weave your own destiny. The meaning of the spider encourages you to make use of your creativity to create intricate, delicate and beautiful things.” Words like gossamer, pointing the way, sitting right outside my window. I love the thought that something most people are afraid of could hold some deeper truth.

I wrote. The sweet balm of jotting down the words, like someone was reading them aloud in my head and it was just my job to write them down, was familiar. Still me. Still mine. I took pictures of the spider, but refrained from posting them, because who would understand? What drives this inscrutable creature to do what she does? What does her life mean, this watching and waiting, this weaving?

I am not sad, but I am not happy either. I am seeking, and watching, and weaving what I can. 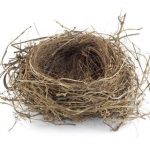 As summer winds onWriting
Being just a bit kinderWriting