“Ma, what’s the name of that picture book you used to like when you were little?” I’m used to out-of-the-blue queries from my daughter, a sophomore at a college two hours away. “Ma, remind me why we didn’t drink milk when we were little?” “Ma, what was that thing you told me about in the Four Hour Workweek?” I’m a repository of her pre-college facts, and when she’s looking to share them, or use them, she often calls me for confirmation. “Remember the time we…” It is a role I cherish. I see her looking at her past a different way now, integrating it into the woman she is becoming, and it warms my heart.

But this question stumped me. Her childhood and mine were separated by decades, a wealth gap, a language. What could she remember about my childhood, let alone a story I might have loved as a girl? That I was captivated by story when I was small is without question, my mind transported to new places in a way a reader can understand. But had I ever talked about it? I couldn’t remember. There had been so many good, new picture books by the time my own children came along that I didn’t dwell in nostalgia. Instead, I showered them with all the bright and beautiful stories all around us when they were little. One of our favorite outings was to the local Borders, where they’d linger in the children’s section for hours.

“The one with the bunny. The sky,” she added.

My throat tightened. I knew the story she meant, suddenly. It had been one of the most impactful stories of my early years. But there was so much I didn’t know about it. I certainly couldn’t think of the title, which was what she wanted (for an astronomy paper, of all things). Even beyond that, my memories were just flashes, the impact of the story far more marked than the details. The book, which I’m almost certain we had in Spanish, but which I remembered vaguely was shaped and branded like those Little Golden Books you used to be able to buy on a carousel at the supermarket, told the story of a bunny who painted the world. He started with eggs, but then moved on to flowers and rocks, making the whole world beautiful and bursting with color. I remember marveling at the many hues in the book, each illustration a small jewel. The bunny painting a flower, a whole landscape. The bunny telling a story by the fire, everyone lit up warmly. Then, the bunny gets old and has to go away. Everyone is sad. But the sky lights up in colors and everyone knows that now he’s up in heaven painting that.

It is probably among my earliest memories of the concept of death, of this idea that the people we love can go away and that we have to look for their impact in the beauty they left behind. The book used to make me unbearably sad, but, at the same time, I couldn’t stay away from it. Time and again I wanted to hear the story of the bunny who painted the world beautiful. In retrospect, what a strange story to tell a child, right? But, in me, it found a ready audience.

I have no idea where that book is now, more than forty years since I last laid eyes on it. With our displacements and our moves, it is probably long gone. But every time I have seen a colorful sunset over these four-plus decades, I think of the bunny painting the sky. In fact, that’s how my daughter remembered the story, she told me. She had her own childhood memories of us being in the car and me pointing out a particularly colorful sunset, and telling them the story.

I got to Googling. I felt foolish. What could I find with a search like “picture book about bunny who paints the sky?” Well, wouldn’t you know it, Google worked its magic. The book was called Grandpa Bunny, published originally in 1951, and a staple to many kids of the early 1970s. There, as I clicked on image results, I saw the illustrations of my childhood glowing in all their color and whimsy: the bunny with the flowers, the bunny telling kids a story by the fire. I hadn’t remembered the bunny being old, and the title had not registered for me as having the word “grandpa” in it. Maybe the Spanish translation had titled it differently. Or maybe, having no immediate family nearby, I remembered the bunny more as a peer than as someone meant to be old. 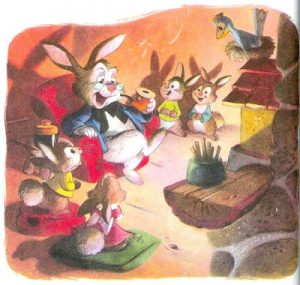 I clicked “buy” and, a day later, a copy arrived at my doorstep. It took just a few minutes to read it. Its impact had not diminished in the intervening years. It still had the power to rock me, to make me wonder about life and death and what we leave behind, now from a very different vantage point, so much closer to the end than to the start. That my daughter remembered me mentioning it, this book written almost exactly fifty years before her birth, added another dimension to the wonder. It made me think of the power of story, and how we carry our stories with us, and how we pass them on.

I still see Grandpa Bunny in every sunset. And now, one other person does too. And that’s the magic of story.

Here’s one of my favorite illustrations from Grandpa Bunny, the fireside scene. Images by Dick Kelsey and Bill Justice.  Story by Jane Werner. I wish I could thank them all but when I looked to see if they had a web presence I discovered that these days they’re all painting the sky. 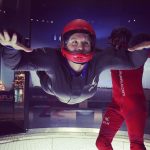 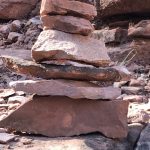