I’m a faker.  I’m a faker and a poser and, what’s worse, I wear the evidence right on my head.  But it’s so wavy and luscious I can hardly feel bad about it.

When I was growing up, my mother told me a few things with certainty.  She said getting tattoos was a horrible idea, because what would happen when you were eighty years old and you had to sport around the inked folly of your youth?  She said girls who slept with more than one man were, well, trampy.  But, mostly, she told me to never, ever dye my hair.  Because dyeing your hair is for fakers and posers.  And my hair was my crowning glory.

I was seven years old when it really sunk in, this concept of hair as crown of beauty.  She had grown mine down to my waist, and she punished it to a shine every morning.  We were living in Argentina, where my light brown hair with shimmery highlights was among the brightest and lightest, shining like gold in the sun.  In a country which glorified the lightest in everything, having light hair meant something important.  It meant that I was special.  (Of my eyes my mother would say, “Too bad about them not being blue.  But at least you’re not blind.”  For years I thought this meant blue-eyed people were all blind).

Old ladies stopped my mother on the street.  “Look at her hair!  It’s so pretty!” they would say, feeling fully authorized to put their papery hands on it.  “And there’s so much of it!”  Of all my achievements, this ability of mine to grow hair was the one that got me the most attention.  Later I would learn that in other countries, this admiration was tantamount to covetousness, and often was an ill portent for the hair that was being admired, as if old ladies could shrivel it off your head just by calling it pretty.

As I grew, my hair darkened.  We were back in the U.S. by then and my mother would say, “It’s the water in this country.  It makes everyone’s hair dark.”  I chopped it off freshman year in high school, a capital offense at my house, punished not by decrees but by deep and mournful sighs.  “You had such beautiful hair,” she would say regretfully, as one might lament a dead friend.

I grew my hair out commensurately with my interest in boys.  “Men like women with long hair,” my mother would say importantly.  I listened.  By senior year, it was well past my shoulders again.  And I discovered Sun-In and lemon juice, adding uneven reddish highlights to my now-brown hair.

That remained my regimen throughout most of my twenties.  I had an uneasy relationship with my color-enhancers, knowing that altering my color was so, well, wrong, but knowing that my darkening brown hair just wasn’t me, dammit.  I was the golden child, the one with the pretty mane, and I was determined to keep it that way.  Even as the harsh Sun-In made my hair dry and frizzy and I had to chop it back to eliminate the fly-aways, I refused to acknowledge anything was amiss in the color of my world.

That is, until I turned twenty-seven and found my first gray hair.

It felt like a body blow, this hair insurrection.  Getting brown was one thing, but losing its pigment altogether was unacceptable, a betrayal of the highest order, a harbinger of decay, old age, death.  I felt done for.  If my tresses were going gray, what would be next?  A walker?  I plucked the offending unpigmented piece of hair off my head and taped it to a piece of paper, solemnly writing the date on it, recording this, the beginning of the end.

Soon new silver traitors sprouted where the old-lady hair had been.  Maybe what my mother said about every white hair you pulled out of your head growing back seven times over was right.  It was reaching emergency status.  So I did the unthinkable.  I went to the drugstore, became acquainted with Miss Clairol, brought her home and colored my whole head.  I spent a long time finding the perfect match to my real color so no one would know my shame.

Somewhere along the line I read that every ten years, you should go a shade lighter.  I also read that your hair color should be what your childhood summer blond had been.  I wrapped up these recommendations into one determination to subtly inch it back to my seven-year-old former glory, going slowly enough so that my mother wouldn’t notice.

But my roots, treacherous and dark, gave me away.  Simply too lazy and distracted to color on a regular basis, I often walked around half summer blond, half Madonna on a bad day.  One day my mother asked me, “You’re coloring your hair?”

Apprehensively I ‘fessed up.  “Yes.”

“What color are you using?  Because I’m finding this medium ash blond I’m using is a little dark.  What do you think?” she asked, thrusting her all-brown, no-white hair in my direction.

I was flabbergasted.  “You’re coloring your hair?” I asked her.

“No, not coloring.  Just a wash to tone down the grays is all,” she lied.  We laughed at each other in our mutual subterfuge.

These days, I’ve given up the home hair care and get a golden color professionally applied to my nearly waist-length hair on a regular basis.  It’s lighter than it ever was in my golden childhood.

The other day, my nine-year-old daughter said, “Mommy, look, your hair is two different colors.”  I still have a tendency to neglect my hairdresser.

“Oh, you should leave it the two colors,” she said.  “It makes you look so cool.”

In the land of hair, there are many shades of happy.

Note: this was written in 2009.  Now it’s shorter and closer to the grown-up brown it wants to be.  Still not gray, though. 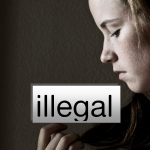 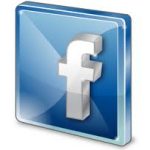 How Much Do You Need Facebook?Facebook Thoughts, What's New