I will confess to having made it through advanced placement English classes all through high school and an English major in college without having read The Great Gatsby.   (There, I said it).  Which served me well when I was invited to go see Leonardo DiCaprio as The Great Gatsby.  My expectations were low.  They were non-existent, really.  So I was not as sorely disappointed as I’ve seen some reviewers are.

As a purely cinematic experience, I was underwhelmed by Gatsby.  I hated the filmmaker’s style.  The acting was all farce, the sets and cinematography all cartoonish.  In the earlier part of the film I found it annoyingly distracting.  The car scenes were ridiculously fake, like Roger Rabbit as Gatsby.

The story had a quality which I suspect comes from the book and which has always made my relationship with “great” American literature difficult: it was very impressed with itself.  (The Brits of that era had the same quirk in storytelling, so I can’t blame only the Americans).  There is a whole lot of “telling” and not nearly enough “showing.”  It was a half an hour until “the big reveal” comes along that Gatsby and Daisy used to be in love five years back and, after the build up it got, you wonder just what the heck the big deal was.  The narrator is annoying and tells the story like he’s telling a great epic, not the story of some guy who once was poor and now is rich and is (spoiler alert) banging some other guy’s wife.  (Sorry for the short notice on the spoiler, but if you haven’t interacted with Gatsby in some significant way until now, my guess is you’re not going to).

Still, I couldn’t help but like Gatsby (the character, not the whole movie).  That probably has to do with the DiCaprio halo effect (pitter patter), but also stems from the fact that I see a lot of Gatsby in myself.  The desperate yearning to be something more, to fix the past, to believe that things are going to turn out how he wants them all feel very familiar.  The love scenes and his great hope for a real future for him and Daisy who represents the life he wishes to have are absolutely touching.  He really believes Daisy is going to leave her husband for him and he pins his hopes on it.  He thinks everything will be alright if he can just make it happen.

Regarding the beautiful sets everyone keeps talking about, there is one grand staircase in Gatsby’s house that I have to get for myself, stat.  There are many visually appealing things in the movie, although I didn’t find it the aesthetic feast everyone keeps claiming it is.  (I convinced my companion to spare me the 3D experience, which usually makes me want to retch.  I was especially glad for it during the car scenes).   Mostly it seemed unrealistic and campy and silly.  If I saw one more string of cheap-looking tinsel, I was going to throw something at the screen.

If this movie was not based on a Great American Novel, I doubt anyone would have paid much attention to it.  Still, because it is, I thought it was just one of those must-see movies.  If you feel the same way, wait until it comes out on Netflix.  Worth the couple of hours but not the trek to the movie theater.  Although tonight the air was divine and the moon half full and I had good company, so the trek wasn’t so bad after all.  Plus: I have to read Gatsby for my book club that’s meeting about it in a couple of weeks.  I may just pull the old high school trick of showing up without reading the book and rely solely on what I learned from the movie.

This website uses cookies to improve your experience while you navigate through the website. Out of these cookies, the cookies that are categorized as necessary are stored on your browser as they are essential for the working of basic functionalities of the website. We also use third-party cookies that help us analyze and understand how you use this website. These cookies will be stored in your browser only with your consent. You also have the option to opt-out of these cookies. But opting out of some of these cookies may have an effect on your browsing experience.
Necessary Always Enabled
Necessary cookies are absolutely essential for the website to function properly. This category only includes cookies that ensures basic functionalities and security features of the website. These cookies do not store any personal information.
Non-necessary
Any cookies that may not be particularly necessary for the website to function and is used specifically to collect user personal data via analytics, ads, other embedded contents are termed as non-necessary cookies. It is mandatory to procure user consent prior to running these cookies on your website.
SAVE & ACCEPT
The deeper yearningWriting 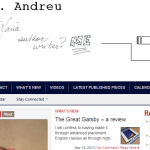