Writing a book about something you’ve considered your biggest secret for most of your life has its challenges.  One is, well, telling the secret.  For the most part, telling has opened me up to the strength in the truth and the knowledge that most people are kind and compassionate.  I’ve learned time and again that what I considered a deep, ugly scar is seen by many as what makes me beautiful.  It has opened my heart to love and acceptance.

Then today my first interview “hit the streets” so to speak and, with it, the nasty comments.  My secret, in case this is your first time reading about it, is that I was an undocumented immigrant as a child. (“Illegal” as the news likes to call it, as if a human being could be such a thing).  The article mentions the experience of being undocumented as the inspiration for my first novel.

After the article there is a “Comments” section where readers can sound off.  And, boy, did they.  Here is one typical comment:  “I hope the Son of Sam law applies here.”  Meaning that I should be denied the proceeds from my book in the way criminals are by the law named for a guy who killed six people.  All for writing a fictional book inspired by the fact that my parents made a choice to come here when I was a baby and had no say in the matter.

It is not the first time I’ve experienced this kind of vitriol when speaking out about immigration.  People have said, to my face, I should have been deported as a child.  (That was a neighbor in my white-collar, northeastern town, by the way).  I’ve been told that I am a criminal, that I should be ashamed of my story instead of speaking out about it.  One grandmotherly-looking woman compared my work of helping to feed the mostly Central American day laborers who wait for work in my area as tantamount to “feeding pigeons.”  After the pigeon reference, she explained, “The more you feed them, the more they keep coming back.  Like pigeons.”  Yes, out loud and in public.

Online is where the comments really get vicious.  I’ve learned that people get very brave about being hateful when posting online anonymously, kind of the way people will be much more horrid to each other while driving than they would ever be face to face. In today’s post, for example, someone commented that, “We have a major invasion in the US. She IS part of the problem.”  (Meaning me).  Talking about immigration shows you the compassionate, enlightened side of people but it also opens you up to a racism and xenophobia that is sometimes hard to believe still exists.

This is the other side of telling the truth: feeling this scathing disapproval.  For someone like me, who has always tried to please, disapproval feels annihilating.  But I’m learning something fascinating:  it’s also strangely empowering.  Because it helps me realize that there may be people who will spew hate at me, but it can’t stop me or take away my truth and my ability to tell it.

I want to be careful about not being too lofty here:  I’ve written a book for teenagers, a fictional story about an issue that’s dear to me but, mostly, the story of a teenage girl.  I’m not exactly leading rallies at the Washington monument or facing down the British Empire in India.  But I am speaking out on the side of compassion and humanity on an issue that’s seen very little of that in the U.S., especially post-9/11.  I wish that we were beyond hateful words like the ones that were posted in the comments to my interview, but we aren’t.  And it’s important to know where we stand.

I began speaking out about my story to put a human face on the public policy issue of immigration.  It was (and is) my hope to do my part to infuse civility and concern for our fellow humans into the conversation.  So maybe this is part of that: letting the haters say what they say so that people of conscience can hear.  Hopefully at the end of that, kindness and acceptance get a little louder. 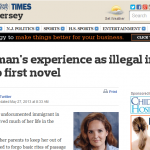 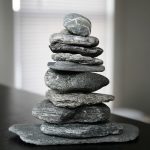