If there was ever a poster couple for a bitter divorce, it was my ex-husband and I.  We are both from traditional cultures, where marriage is understood to be forever.  We did not have a good blueprint for what a civilized divorce might look like.  I barely knew anyone whose parents were divorced when I was a kid.  I live in the heart of Mayberry – no one seems to get divorced in my town.  Add to that the fight for survival that divorce feels like – a fight for kids, property, the whole life you’ve built – and it was a recipe for some very ugly times.

It’s been three and a half years since my divorce, and all passions fade… even anger.  Over time, I stopped staring out the window at exactly 6:00 o’clock on the days he had the kids, frantic with the unfounded fear that would be the day that he didn’t bring them back at all.  I stopped taking every lateness like a personal affront.  My pain over his many hurts, huge and small, began to fade.  I stopped crying when I got up in the morning and my kids weren’t there because they were sleeping at dad’s.  After some more time, I began to actually like my single-girl days.  I cultivated a fun social life that involved more than soccer practices and kids’ birthday parties (to the envy of all my married girlfriends).  I rediscovered my beloved Manhattan, culture and quiet.  I dated.

Eventually, much to my surprise, even my ex’s volcanic anger seemed to cool.  He started answering the phone himself when I called instead of automatically handing it to the kids.  He spoke to me at soccer practices (a vast improvement over even the end of our marriage, never mind our divorce).  Then, early this year, my daughter had a bit of a hard time, and he began to call me for long heart-to-hearts about her.

Still, despite the detente, you could have scooped me up off the floor with an ice cream scoop when, after I mentioned to him that I wanted to paint the shutters (of the house we shared while married, which I’d kept), he offered to bring over his two-story ladder so I could reach the ones on the second floor.  And then he took them down for me from the second floor (while I silently prayed, ‘Please don’t let my ex-husband fall from that little ledge outside my second story  windows because with our history I don’t know how I’ll convince anyone I didn’t have something to do with it’).   AND then he stored his ladder in my garage and came back to put the shutters back up the following weekend.  That man always did passionately love a home improvement project.

So, as my son’s twelfth birthday approached, I threw out a suggestion, although I was pretty sure he’d shoot it down.  “It might be nice for the kids to see us together for his birthday.  We should all go out to dinner.”

Too soon, I figured.  Except that in his classic man-of-few-words style, yesterday, the Sunday before our son’s birthday, he sent me the message, “We’ll go out for his birthday, all four of us, tonight.”

It was how I used to convince him of things when we were married, sitting through his “no” until he decided that my suggestion had been his idea.  Except now, with all my freedom and room to breathe, it didn’t feel annihilating… it felt like he was doing the best he could do.

I put on a dress because I remembered he felt I never dressed up enough for occasions.  I carried my phone and wallet in a purse (although I rarely use a purse), an expensive Coach bag he gave me years ago in the hopes of getting me to be more like the traditional woman he wanted.  I hated stuff like that when we were married, the way he tried to make me someone else.  Post-marriage, carrying that purse just felt like a kindness, not a capitulation.  I had tried to be a civilized divorcing person and I had failed.  At least, hopefully, I could be a dignified divorcee.

He had had the same impulse and came scrubbed up for dinner, date-night style.  He’d made my daughter put on a dress and my son put on cargo shorts (a major improvement over his usual gym shorts).  When I got in the car, he said, “How about that restaurant in Moonachie?”

“The Spanish one?” I asked.

It was the place he’d always chosen during our marriage, back when he was trying to make up for something.  And it was a nod to my heritage.  He was trying really hard.

So I tried hard too.  When he said Obama was a secret Muslim, I smiled and said, “Let’s not talk politics.”  Every time he made the kind of statement that would have ended in a knock-down, drag-out fight while we were married, I gently changed the subject.  I didn’t tease him with my barbed jokes.  My anger was gone.  There was no power struggle left to win.

It occurred to me that I was behaving the way a wife of many years would behave, overlooking her man’s faults, long past her hope that she might change him or make him the man she’d once dreamed he’d be.  I simply appreciated him.  More than that, I appreciated the happy glow of my children, witnessing their parents together for the first time in years.  Despite our broken path, we’d still gotten to be two middle-aged people who just accepted one another.

Lately, divorced and in my 40s, I’ve been feeling very sad about the fact that the clock has re-set to zero for me.  My friends are celebrating 15 and 20 year anniversaries, like I would be if I had stayed married.  That they are and I am not feels like a major failure that darkens my days.

But going out to dinner as a family helped heal that.  It helped me remember many key things.  One was that I was the one who filed for divorce, that I am where I am through my own choices.  Another was that I could appreciate the father of my children while acknowledging that we had long grown apart and that he is not the guy for me.  With my wedding anniversary right around the corner, last night could have been an anniversary dinner as much as it could have been my son’s birthday celebration.  But it wasn’t, and I had decided that.   Back when I was married, I could have sucked it up and told myself that marriage is forever and put up with all kinds of things that hurt me and made me feel unloved.  But I chose not to and that was the right choice for us.  The right choice is not always the easy one.

Last night I felt a love for my ex-husband that I haven’t felt since early in our marriage.  But there were no regrets in that love, no wishes that things had turned out differently.  I loved him for loving our kids, for putting aside all the past hurts to give them a pleasant night.  I loved him for getting over our very messy break-up.  I enjoyed his simple nature.  He felt so familiar.  I noticed that he still talks about the same boring three things: his business, his future business ideas and his homeland.  I used to hate that when we were married, aching for meaningful conversation, but last night I just noticed it.  I took him for the way he is, without wishing he would be different.  He was an old friend with whom I share decades of history and two perfect children.

But, more than that, I loved myself.  I loved the woman I’ve become through the freedom from a marriage that was wrong for me.  I loved that at the end of the night I pulled out my credit card to pay and we split it without me yearning that he be the all-powerful provider I once wanted him to be.  I loved that I was gracious and patient without needing to be more clever and right.  I loved that I could be friends with someone I once thought I could never even speak to again.  After dinner, I loved stepping into the house that is now fully mine, a place where everyone who visits comments on the peace and love that you can feel as soon as you walk in the door.  A peace that never lived there when he was working long hours to avoid me and I was hoping my marriage would be different while we both grimly tried to hold on.  I loved that my children could remember the pain of our split, then see the healing that comes after it.  That they could know that their parents are happier apart and that everything has worked out okay.

At the end of the night, I thanked him for a nice evening.  It had been a night full happiness.  The brave and painful choice to divorce had led to a greater harmony than staying married ever could have.  It was a perfect night, a night in which everything was exactly the way it was supposed to be.  Including him driving away at the end of it. 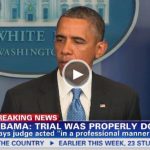 Should President Obama have said, “Trayvon Martin could have been me”?What's New