There I was, texting with a new guy from Match. It was going so well. We’d quickly graduated from messages on the website to an hours-long text conversation about love, trying again, baseball, college girlfriends/boyfriends, What Went Wrong In Your Marriage (you know: obligatory middle-aged dating talk). I could tell from his pictures he was cute, totally my type. He liked to talk about feelings and about the future. He texted me a picture of one of his grown sons and, later, of a romantic sunset.

I won’t go into detail other than to say that he intends to relocate to a big, empty state and build a 1,000 square foot cabin in the middle of nowhere in the next couple of years so he can live away from mortgages and civilization.  (He was sort of feeling me out to see if I’d be game for coming along). He even quoted me this fact: the biggest county in his state is the same size as my entire home state of New Jersey, population 9 million.  Population of his county? 25,000.

Peeps, he offered this information like it was a good thing.

Can you say dealbreaker?  To support his plan, he quoted me a statistic that in 1950, the average house was 950 square feet and today it is 2300 square feet. Because, you know, the fifties were a time when everything was better. It led me to want to compile this list of other facts of life in the 1950s just for fun (oh, I kept texting with him, and I may even go out with him next weekend – it was discussed- but I Googled and wrote this post during our conversation anyway).  Here it is, born of my boredom in trying to get to know the Unabomber as a dating prospect: five things women couldn’t do in the 1950s:

And this, folks, is without even delving into what it was like to be a Black or Latina woman in the 1950s.

The next time someone tells you how great the 1950s were, you know what to say. Be sure to write me and tell me all about it when I’m in my cabin out west with my new husband, the Unabomber. {wink}.  I wouldn’t be so amused by this if I hadn’t just had that great date I wrote about. (Missed it? Click here to read). Maybe I’ll have a sleepover-worthy boyfriend by Thanksgiving, one that actually wants to have dinner with us and meet my friends and family and be proud to call me his girl? That way my family can stop thinking I’m an asexual nun who can’t get a man. It’s a bit soon to say for sure, but hope springs eternal. Especially when you’re not a woman in the 1950s. 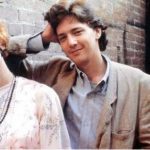