When I was small, I was religious in the simple, heart-felt way only a child can be. People told me things and I steadfastly believed them. I used the stories I heard as the backdrop for my games of imagination. And since I heard religious stories, “God the bearded white dude” sometimes showed up in my play. (I thought the devil lived in the flames of the wood oven of my grandparents’ bakery in Argentina, so I had a varied cast of characters). My time in Argentina, particularly, from ages 6 to 8, was a time of deep religious curiosity.

One of my favorite games was imagining I lived in heaven, on clouds springier than the cushions of the couch I used to recreate them. God stopped by sometimes (looking suspiciously like the guy in Michaelangelo’s paintings, except with real clothes on) and I chilled with angels, although even at the time I suspected that their lives were kind of boring with all that goodness and harp-playing. It was not long after that that I figured out I’d most likely be going to the other place, should either exist, because I was an incorrigible sinner by the nuns’ standards and absolutely everyone I considered worth hanging out with would be there too. Then, of course, I grew up and changed my view of it all. As I like to joke, 12 years of Catholic school will make an atheist out of anyone.

Anyway, the heaven fantasy probably took hold on my flight to Argentina at six years old after the death of my grandfather. I remember being mesmerized by the clouds. This week, on the flight home from San Francisco, I had a window seat (and a mercifully open middle seat) and I couldn’t help but be reminded of the wonder and my love of the breathless beauty that is the sky above the clouds. I took this picture. It’s now the wallpaper on my phone.

To think that there have been emperors and kings who haven’t had the privilege of slipping the surly bonds of Earth and, for a moment, touching the face of God. (Yes, even I can quote Reagan). To think that we enjoy privileges unrivaled through the bulk of human history, crossing continents in hours and holding all of human knowledge in a device in the palm of our hands. I forget sometimes the miraculous time we live in and I’m so grateful for the reminders.

Also, so grateful to be home. I do so love it here.

In other news, I am going out with potential victim number 5,782 tonight (the number is not actually that high, but so it feels sometimes). Because hope springs eternal that one day soon I will be more than a cast-off or a second-best. And I got my (heartbreaking) confirmation that all is lost, no effort will be made and that all that’s left for me to do is to try to find what’s next. I got my finality, much as I hoped not to. It takes two to commit and not give up easily. Sometimes, no matter how much you want something or how hard you try to make it happen, you just can’t pull it off alone.

So, anyway, with being distracted lately I’d forgotten that I’d reactivated my Match account a few months ago and was pleasantly surprised by my inbox when I logged back in in SF after weeks without checking. (It’s how I soothed myself after my wicked, lonely gluten episode, trying to see if anyone wanted me. Turns out maybe yes). Stay tuned. Perhaps. I hope. I am so sad and so ready to find the man who cherishes me and respects me and chooses me above all others. 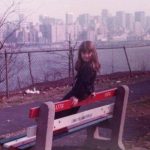