What does it mean to be a prolific writer?

A short while back, a writing buddy shocked me by saying she admired my writing output.  Surely she must have just been blowing smoke.  One of my deep, daily pains is how little I write.  When I do sit down to write, words seem to flow effortlessly.  So why do I resist it so damn much?  I loathe myself for my resistance.  I spend most days with a nagging dullness in the back of my mind: write.  But I don’t write.  And so I brood and hate myself for it. 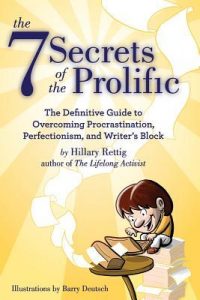 I laughed her compliment off.  Then, a few weeks later, I started to read a book about procrastination aimed directly at writers called The 7 Secrets of the Prolific: The Definitive Guide to Overcoming Procrastination, Perfectionism, and Writer’s Block

.  One of the author’s suggestions is to acknowledge yourself for every bit of writing time instead of berating yourself for the wasted time.

But, ha!  I don’t do self-acknowledgement all that well.  I filed the suggestion away under the category of things for other people, writers who deserve to have their small wins acknowledged.

This week, I had to turn something in to my agent.  As usual, I procrastinated, took too long, and overall hated everything I wrote.  When I finally sent it to my agent on Tuesday, I remembered the advice about the acknowledgement.  I resolved to stop telling myself how little I’d written and how long it had taken and to acknowledge what I had done, no matter how sub-par.  I looked at the writing.  It was four thousand words (about 16 pages).  My inner critic, prolific scorner that she is, poo-poo-ed the amount of writing.  Four thousand words in two weeks?  So what?  That works out to 2,000 words a week, or about what I hope to produce daily, not weekly.  It felt like cheating to acknowledge myself for something so short of adequate.

But then I resolved to look again.  I recalculated.  The truth was I had actually written the four thousand words in just a bit over one week.  At that pace I’d write 200,000 words a year, or just over the length of three decent-length young adult novels.  And – this is important – that excluded all the other writing I did, all the diary entries and blog posts.  It also didn’t take into account all the outlining and thinking about plot points which, although not countable numbers on a page, do contribute to finished books almost as much as initial word count output does.

If I had hired this inner critic to devalue me and skew the facts against me, she couldn’t be doing a better job.

So last night, after a long day’s work, I set out to write.  I only got a little bit done.  When The Critic started to chime in, I shushed her.  It gave me the motivation to write some more.  Final word count: 1100.  Then, this morning, two blog posts (this is the third).  Plus more work on the novel.

Maybe I’m prolific after all.

Most of my life, I’ve only known one way to motivate myself: crack the whip.  It is a technique born of fear and lack of trust.  There’s a belief that underlies it: if I’m not hard on myself, won’t I just slip into sloth and lack of productivity? No, it turns out.  When I’m kind to myself, my creative self feels safer to peek out from her foxhole and come out to play.  She doesn’t need to be bullied into it.  She needs to be given the space without the blasts of grenades.

I long for the day when I’m beyond word counts and tests of worthiness, when writing flows as it wants to and when I trust in it.

Working on it every day.

This website uses cookies to improve your experience while you navigate through the website. Out of these cookies, the cookies that are categorized as necessary are stored on your browser as they are essential for the working of basic functionalities of the website. We also use third-party cookies that help us analyze and understand how you use this website. These cookies will be stored in your browser only with your consent. You also have the option to opt-out of these cookies. But opting out of some of these cookies may have an effect on your browsing experience.
Necessary Always Enabled
Necessary cookies are absolutely essential for the website to function properly. This category only includes cookies that ensures basic functionalities and security features of the website. These cookies do not store any personal information.
Non-necessary
Any cookies that may not be particularly necessary for the website to function and is used specifically to collect user personal data via analytics, ads, other embedded contents are termed as non-necessary cookies. It is mandatory to procure user consent prior to running these cookies on your website.
SAVE & ACCEPT
Cities supporting Obama’s immigration reformWriting
The Big Spring Clean is officially done! Day 27Writing