I’m back home from a whirlwind weekend in San Francisco.  I was in SF to attend the annual librarian convention and an awards ceremony.  Both were awesome!  But perhaps my favorite part of this weekend was that it fell on Gay Pride Day.  And not just any Pride Day, but the one right after the historic Supreme Court ruling which ended the term “gay marriage” and made it… just marriage.

We made my way down Market Street, along the parade route.  The weather was perfect for a large crowd – brisk and sunny, in the high 60s.  As far as the eye could see, there were humans celebrating – older men, holding hands, one in leather, the other one in dad jeans, young women wearing sparkling spandex boy shorts and rainbow-heart pasties, tourists looking bewildered (probably my category).  Rainbows filled the crowd, on wigs, boas, tutus, t-shirts, all to match the floats filled with gyrating, exuberant people and pounding music.  It was a beautiful celebration of life.

Oh, and I also got to see more penises live and in person than I’ve seen in the last 25 years combined, most notably in the “California Men for Naturism” booth, where several men were standing our in socks and sneakers and nothing else handing out pamphlets (presumably to tout the benefits of standing around in large crowds with your johnson hanging out? – I didn’t get close enough to find out).  It may be a sign of my middle-age and “mom-hood” that the first thing that occurred to me at the sight of one particularly impressive organ was, “You’re going to set such a wicked sunburn on that thing.”

Overall it was a fun, crazy, beautiful day of celebrating individuality and happiness at an important civil rights win for a community that has fought long and valiantly for it.  I was so proud to be a part of it. 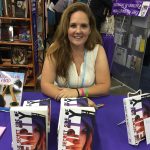