Call me sentimental, but I’ve always had a thing for Pluto.  First of all, it’s out there, way far from our sun, doing its faithful loop in the shivery, outermost reaches of our solar system.  Love (in the form of light) from the sun takes five and a half hours to reach Pluto at its average distance from our star (in contrast, it takes 8 minutes for it to reach Earth).  The sun looks only like a bright star from Pluto, illuminating it no more than the moon does Earth.  And yet, Pluto continues to orbit the sun.  That’s commitment to staying in a relationship.

Second, Pluto has had something of a bumpy ride.  Discovered in 1930, it was firmly entrenched as the ninth planet all through my days at school (It was the “pizza” in the planetary mnemonic, “My Very Energetic Mother Just Served Us Nine Pizzas, which my friends and I used to memorize the nine planets for tests).  And then, poof, just like that, its planetary cred began to be questioned in 1992.  By 2005, the year my daughter entered kindergarten, it was formally demoted to a “dwarf planet,” reinforcing the human preoccupation with size.  As hard as it is for me to believe, my children have gone through all their schooling being told that Pluto is not a planet.

Still, Pluto continues to delight us.  A probe, launched in 2006, is just getting close to the planet (there, I said it.  Pluto, you’ll always be a planet to me) and sending back pictures.  And… guess what!  As if to reassure us that it doesn’t have any hard feelings, the pictures show that sweet little Pluto has a heart on it.  Pitter patter.

I know the logical among us will say that the stylized heart is a human construct, that that’s not really what human hearts look like, that that’s not how hearts have been represented throughout human history, that planets don’t send messages and that it’s probably a trick of the light.  But the dreamers among us know that it is incredibly sweet that the first time Pluto showed us its face up close, it did so with a symbol of affection, a reminder that love can live even in the coldest places, surrounded by the vastest of neglect.  Much love, Pluto.  Much love.  I heart you.

This website uses cookies to improve your experience while you navigate through the website. Out of these cookies, the cookies that are categorized as necessary are stored on your browser as they are essential for the working of basic functionalities of the website. We also use third-party cookies that help us analyze and understand how you use this website. These cookies will be stored in your browser only with your consent. You also have the option to opt-out of these cookies. But opting out of some of these cookies may have an effect on your browsing experience.
Necessary Always Enabled
Necessary cookies are absolutely essential for the website to function properly. This category only includes cookies that ensures basic functionalities and security features of the website. These cookies do not store any personal information.
Non-necessary
Any cookies that may not be particularly necessary for the website to function and is used specifically to collect user personal data via analytics, ads, other embedded contents are termed as non-necessary cookies. It is mandatory to procure user consent prior to running these cookies on your website.
SAVE & ACCEPT
Check out this billboard!Writing 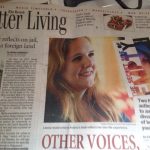 Featured in The RecordMedia, Writing