The man, thirty-three years old, was living in perilous times. There was a war going on. Just the month before, the enemy had burned down several of his young country’s most symbolic buildings. Now, they were taking aim at his city. One of his friends was taken prisoner by the enemy. The man, lawyer, patriot, friend, went to negotiate his friend’s release. It was granted, but they weren’t released right away. They were held on an enemy ship eight miles off the coast while the enemy bombarded the city with everything they had.

There was once a little girl who wasn’t sure she belonged here, after sneaking in. You can guess who she was. I remember vividly the first time a grammar school teacher told us the story of “The Star Spangled Banner.” She read us every line, and told us what each of them meant. I have been grateful to that teacher my whole life, because some of the words can seem opaque to some, and, unless you know the story, it might be hard to find a connection with our country’s anthem. But, for me, every time I hear it, I am filled with a bursting pride, and a love for the many hearts who have raised their eyes to look for it in hope for more than two hundred years.

I can visualize the moment that inspired it, the way I did forty years ago when that teacher told the story. The ship. The frustration of being held. The helplessness at watching your city being bombed. The outrage fresh over the burning of the White House the month before. And the hope – fragile, glimmering, nearly impossible – that when the smoke cleared, a sign of victory would be aloft. I just love the thought of that moment, of living through doubt and fear, and seeing the flag emerge slowly in the uncertain dawn.

Hearing that story was a first in many ways for me. As my teacher explained line by line, she told us that the song’s original story was part of the reason we set off fireworks on Independence Day. I’ve never known whether that is true, but as she explained the similarity, it was the first time I realized that fireworks could be seen as approximations of bombs, that bombs flash a similar way when you’re trying to make out which flag is flying. It was the first time I learned that our anthem was set to the tune of a British song, although it would be several more years before I learned it was an old drinking song. It was the first time I learned that the anthem was written more than thirty years after our country’s founding, and that it wasn’t written as a song at all, and not declared our anthem until 1931.

And, I can’t quite know for sure if it was the first, but it was certainly one of the earliest memories I have of falling madly in love with America, its hope and tenacity, its strength and resolve, its lore and its people. We are not perfect, Americans, but we are always striving to form a more perfect union, and I am proud to call it home. Even in these times.

Thank you, teacher whose name I can’t remember. And thank you, Francis Scott Key. 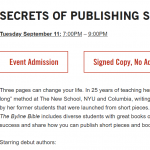 I’d love to see you tonightWriting 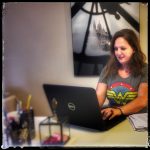