An early reader of LOVE IN ENGLISH came back with some astute observations. Altagracia, the main character’s fabulous new friend in LOVE IN ENGLISH, a Afro-Caribbean Latinx character, is queer and from a well-to-do family. Still, despite the fact that she bucks the average experience of many Dominican immigrants in the U.S., I don’t allot a lot of time on the page to talking about that. There is little treatment of how the machismo ingrained in so much of Latinx culture, and Dominican culture in particular, affects her. This is by design. Let me explain.

Much smarter and more well-informed people than me have written on the topic of writing outside your own experiences. The grossly simplified version here is: don’t, particularly not for a POV character, unless you do extensive research. And, even then, don’t. Although a more expected choice for the main character, Ana, might have been to make her an immigrant of color, I am not an immigrant of color, and that’s why she’s a white girl from Argentina, like I’m a white person from Argentina.

When it came to Altagracia, I worked hard to stay in my lane. I have known hundreds of immigrants from the Dominican Republic. For eight years, I worked in a law firm in Washington Heights, a part of New York City heavily populated with Dominicans. One of my responsibilities at this job was to help our clients, many of whom spoke only Spanish. I’m bilingual and Spanish is my first language. I spent hours with clients, helping lawyers prepare them for their “EBTs” (examinations before trial), giving them updates on their cases, translating for lawyers during intake sessions, talks of settlement, prep for real estate transactions, and much more. If I spent 25 of my 40 hours per week speaking to clients over the eight years I was there, that would have been 10,000 hours. But I did more than that. I made dear Dominican friends, hanging out with them outside work, getting to know their families. I fell in love with Dominican food (to this day, I live just over the George Washington Bridge from Washington Heights, and on a clear day one of my favorite things to do is to walk the bridge to get some roast chicken at El Mambi or one of the other fabulous restaurants I was introduced to during my time at the firm). When my Dominican friend got pregnant and her partner wasn’t available, I went with her as her coach to the Spanish-language Lamaze classes she signed up for at Columbia Presbyterian Medical Center. When we arrived, though, we found out that the Spanish-speaking Lamaze instructor had just left her job, and that the only person to conduct the classes was a non-Latinx white nurse. I offered to translate for her. For six weeks, my friend and I used one of our lunch hours each week to walk down to the medical center, me doing double-duty as partner and translator. When my friend’s six-week class was done, I stayed on to volunteer to translate for the predominantly Dominican group of women. I did this for years.

So I know Dominican culture. I know its wit and quickness of tongue. I know its delicious food and its amazing apartment parties. I know its dance clubs and its irreverence. To this day, an overheard “esa baina” can perk my ears up seeking some of the humor and fun I had in Washington Heights.

Still, none of this qualifies me to speak for Dominican culture. It’s one thing to know a culture, even as intimately as I got to know Dominican culture. It’s another one to live it. I can’t speak to the issues of Dominican people of color, in particular. Did I observe a lot of machismo in my time working in Washington Heights? Of course I did. Did I see the anti-gay sentiment that can pervade Latinx culture? Of course. (And this is in no way to suggest that this is just a thing in Dominican culture. Colorism and homophobia are, unfortunately, far too prevalent in a lot of Latinx cultures). But I was not comfortable putting a criticism or even a commentary about that in the mouth of a character of color. I didn’t want to give her the emotional labor of explaining this to the reader. I wanted her life to be a celebration. She’s an exuberant fireball of a character, inspired by so many of the smart and resourceful people I met in Washington Heights. I wanted to let her just have that.

Is it the right choice? I’ll let readers decide. For me, it was a careful and considered one. Whatever I got right or wrong with Altagracia, know that it was done with great affection, respect, and a desire to do good in the world. 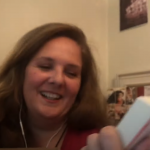 Unboxing video or…. Why is the first page of LOVE IN ENGLISH in Spanish… and what does it say? (VIDEO)What's New, Writing