By Maria E. Andreu
Posted January 2, 2014
In TSSoE
Meet the Characters in The Secret Side of Empty – Nate2014-01-022018-02-10https://mariaeandreu.com/wp-content/uploads/2018/02/logo-4-white-letters-with-transparent-background-wider.pngMaria E. Andreuhttps://mariaeandreu.com/wp-content/uploads/2018/02/logo-4-white-letters-with-transparent-background-wider.png200px200px

Nate is the kind of first boyfriend M.T. has always dreamed of having: sweet and cute, with a great sense of humor and a terrible jump shot.  A little bit shy, he first tells M.T. that he loves her via post-it note.  But at least he tells her.  And that adds a magic to M.T.’s senior year that makes her absolutely tingle.

But there is a lot M.T. isn’t telling Nate, like the fact that she’s undocumented.  M.T. loves Nate, but she doesn’t where their relationship is going since she doesn’t know what the future holds for her without a social security number and no hope of everything that Nate takes for granted: a college education, a driver’s license, a real job and a normal, comfortable life.

And what Nate isn’t telling M.T. might just mean the end of their relationship.

He hugs me, and I feel the same sparks from the movies, but all over the front of my body. This guy is like electroshock therapy. 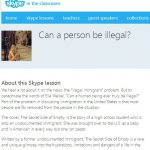 Skype in the Classroom – Setting up book chatsTSSoE
Meet the Characters in The Secret Side of Empty – M.T.TSSoE