You know you’ve been in New York too long when things that other people would find fascinating and cool – like movie shoots and news trucks – just make you mutter under your breath and speed up.  I had just this type of moment this morning.

It was smack dab in the middle of my normally 10-minute walk to work that the foot traffic started to get heavy around 40th and Broadway.  Several people were standing in the middle of the walking path taking pictures.  A bunch of guys in Superbowl jackets were milling about looking up and pointing and an NBC news truck was parked near the crosswalk.  The big attraction was some giant blue and white THING being erected in the middle of Broadway, complete with cranes and shouting construction workers.  It looked like a carnival ride on steroids and crack.  It was the size of a block-long building.  I shuddered to think how many tourists that thing will attract when it decides what it wants to spawn into.

(A brief aside to non-New Yorkers… we love it when you visit.  Really.  We just ask that you refrain from stopping short and looking up right in front of us when we’re trying to trudge to the miserable jobs we must hold on to to pay half our salary for the honor of living near the “greatest city in the world”).

Blissfully ill-informed about all things sports, it wasn’t until midday when someone said, “So, have you seen the toboggan?” that I even got clued in to what it will be.  Apparently it’s part of the Superbowl festivities.  What the connection is between a toboggan and football is, I am not entirely sure (I don’t know a thing about sports, truly).  But I do now know that this particular football toboggan is supposed to go from 34th to 42nd Street all along Broadway, thereby becoming a large, touristy dragon that I will have to slay every morning on my way to work.  I’m also not sure what the connection is between my route to work and the Superbowl, since the football game will be played in NEW JERSEY, which is an entirely different state.  But I digress.

Enjoy your event, sporty people.  But when you see the news coverage of the giant blue dragon eating Times Square, feel a little bit of sympathy for me. 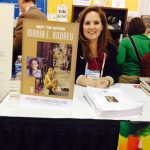 [PHOTOS] Book signing in at ALA Midwinter 2014 in PhiladelphiaWhat's New 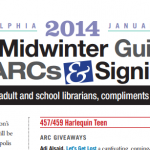