When I was sixteen, I was all about the movie stars of the 1950s.  Not all of them, just the tragic ones. (Although, given enough time, most actors’ lives can take on a patina of tragedy, if only through physical decline we all face, which seems so very tragic at sixteen). Really my main fascination was Marilyn Monroe.

I found Marilyn in my wanderings of the New York City of the 1980s (back before the Disneyfied version of the city that exists today, when New York was a place that could put some hair on your chest, and about which the nuns who ran my high school warned, “If you go there, you will get sold into prostitution.” It all sounded so sordidly exciting I just had to sneak in at every opportunity). I picked up biographies of her at The Strand and sometimes on the little tables set up on the street right next to the guy with the boom box shouting about the Nation of Islam, near the guy trying to sell me a dime bag in broad daylight. I read Gloria Steinem’s book about her, that attempt to reclaim her away from objectification. I bought postcards of her on West 8th Street in the Village. When I found out she once lived on Sutton Place, I made a pilgrimage to stare at the unremarkable facade of the building, trying to conjure her. I reveled in the knowledge that the famous subway grate scene – the one that supposedly broke up her marriage with a jealous Joe DiMaggio – was filmed on East 61st Street.

There was something of a sisterhood between Marilyn and me. She was the older, far more gorgeous sister, and I was the kid who was sure I was in store for some similar kind of tragedy, if not quite the acclaim. I studied her pictures carefully, trying to figure out how to imitate her pout, aching to be that stunning. I read the stories of her foster care childhood, the deep, yawning hole she seemed to never quite fill. When I learned that she was late to everything because she liked to feel like she was important enough to keep people waiting, I understood her at my core.

Although her life had all played out by the time I found her in the 1980s, sometimes it felt like it was happening in real time. When I read about her meeting Joe DiMaggio – the guy who would put flowers on her grave for years even though they’d both married other people before she died – I thrilled at the timeless love in that. But it was when I got to the chapters about her (also doomed) relationship with Arthur Miller that things got really exciting.

I didn’t just want to be Marilyn, I also wanted to be Arthur. I fell in love with his mind (if not his looks) during my high school reading of The Crucible.  He’d written one of my favorite quotes of all time, one I scribbled on notebooks and folders for years, “An hour before the Devil fell, God thought him beautiful in Heaven.” Here was a man who knew how completely people could shock and disappoint you, how mortally they could wound you before you had a chance to see the truth about them. I had thought many devils beautiful just moments before they’d revealed their true colors in my own life by sixteen, and I loved that Arthur Miller gave me words for that experience.

I read everything he wrote obsessively. I read about their love story too, the gorgeous, fragile, broken beauty meets the taciturn, dark intellectual. Every time I got to those chapters I rooted for the alternate ending. I learned the tremendously romantic fact that Arthur Miller wrote a screenplay just for her – The Misfits – but that it was the filming of that very movie that was finally the end of them. Out of sheer heartbreak, I refused to watch it. It’s the only one of her movies I haven’t seen (and I’ve seen even her early ones, like Niagara and her bit part in All About Eve). I learned that he grew to be ashamed of her, and I burned with that shame as if it was my own.

It wasn’t until many years later that I realized why they were so fascinating to me: both of them were a part of me. I was the girl who wanted to be so gorgeous that men would drool over me and follow me, the girl who wore miniskirts and tight shirts just to get attention, who thought that male desire was a good enough substitute for love, who wouldn’t leave the house without makeup until my thirties. But I wanted to be him too, smart, thoughtful, insightful. I wanted them to work out because I wanted both of those parts of me to live together happily, to know that smarts and sex appeal could coexist, to feel like I could have it all.

When I turned thirty-six, the age Marilyn was when she died, I noted the milestone and said farewell to the Marilyn side of me. I’d never quite gotten there anyway, but even the aspiration seemed quaint by then. Deep in the first tremors of my crumbling marriage, I was tired of the notion of myself as product, not just sex object, but maid and

cook and decorator. I wanted to just be without worrying how I was perceived. (A goal I’m still striving to achieve). Some years later, I published my book and, ironically, said goodbye to my Arthur Miller aspirations too. I had learned by then that there is no emulating anyone else’s career or style, that a writing life is about the journey and not the splashy moments of marrying movie stars and writing screenplays for them. He was easier to let go, because I found that I could still love his work without aching to be him.

I was prompted to write this post when someone tweeted this picture, which totally reminds me how in love with their love I was all those decades ago. Here she looks adoring and luminescent. He looks satisfied and on top of the world. They look madly in love. They would crumble as a couple and as individuals in some ways, but they had this moment. And I had them, for a while, to see me through the days when I was still inventing myself. For that, I am truly grateful.

This website uses cookies to improve your experience while you navigate through the website. Out of these cookies, the cookies that are categorized as necessary are stored on your browser as they are essential for the working of basic functionalities of the website. We also use third-party cookies that help us analyze and understand how you use this website. These cookies will be stored in your browser only with your consent. You also have the option to opt-out of these cookies. But opting out of some of these cookies may have an effect on your browsing experience.
Necessary Always Enabled
Necessary cookies are absolutely essential for the website to function properly. This category only includes cookies that ensures basic functionalities and security features of the website. These cookies do not store any personal information.
Non-necessary
Any cookies that may not be particularly necessary for the website to function and is used specifically to collect user personal data via analytics, ads, other embedded contents are termed as non-necessary cookies. It is mandatory to procure user consent prior to running these cookies on your website.
SAVE & ACCEPT
Thinking it throughWriting 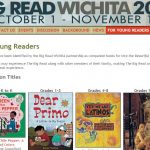 Wichita Library’s Big Read chooses TSSoE as one of their titlesWhat's New, Writing