Anyone who has ever loved me, or even interacted with me in any significant way, has at one time or another offered the advice, “You should think less.” Well-meaning, of course, but just as actionable as if they suggested I remove my left leg and hang it up on a hook while I hobble around to experience one-leggedness. My penchant for thinking things to death can get exhausting, but I have no idea how to stop it, or even curb it for a while.

That’s why it was sort of amazing to go row on a creek not far from my house recently. It’s not a particularly impressive body of water, but it was opened up for kayaking and other water sports a few years back and I try to get down there every once in a while. I’d never rowed crew before, though, and I wasn’t prepared for how much more involved it was than just kayaking or rafting, both of which I’ve done a fair amount. First of all, you’re on a team, so you’ve got to synchronize your movements (or, in my case, apologize a lot for slamming your oar into theirs a whole lot). Then you’ve got to remember a somewhat intricate set of movements: left hand above right so you don’t crunch your thumbs together, tilt oars to be parallel with the surface of the water, bend your legs, tile oars perpendicular to the water, dip down to put them in, puuuullll, stretch legs. Repeat.

Although it sounds simple, and is based on movements I’ve made lots of times before (on the rowing machine at the gym, while kayaking), I found it completely absorbing. Concentrate as I might, I often got the order wrong, tilting before pulling, dipping while the oars where still parallel, not perpendicular. It pushed me to go deeper and deeper into muscle memory, somewhere beyond thought. When I let my body take over, I got it right more often than when I tried to think it through. And when I got it right, I felt like I was flying over the water in a perfectly synchronized machine. It felt amazing.

It wasn’t until about an hour later, when we were pulling back into the dock, that I realized I had stopped thinking for almost the full time I’d been on the water. The concentration on the physical tasks had crowded out all other thought – no easy feat for a brain as trained in being in charge as mine. Although the workout had been grueling (and so much more full-body than I’d anticipated), I was at peace in a way I couldn’t remember being in a long time. So that’s the trick, I thought. Exhaust my mind into shutting up.

It’s nice to find a clue to that level of zen, although I wish it was more of a full-year thing (or is that my mind overthinking it again?). So, maybe it’s time to row crew more regularly? 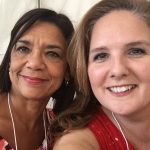 Texas Teen Book FestivalFeatured, Writing
Back in the day when I wanted to be both of the people in this pictureWriting