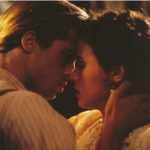 Yesterday, I found myself recounting the plot of Legends of the Fall to my boyfriend in exacting detail. For the uninitiated, Legends of the Fall is a Brad Pitt movie from the early 90s (based on a novella which, I’m sorry to say, I’ve never read and – bad novelist – don’t feel a need to). It is sweepingly romantic, and, Brad Pitt being at the height of his gorgeousness, very easy on the eyes. In brief (lest I put you what I put my boyfriend through yesterday) the story goes like this: a woman named Susannah (played by Julia Ormond) goes out to Montana with her fiance, and meets his two brothers. The brother (who is the youngest) goes off to World War I and gets killed. The romantic lead Brad Pitt plays, Tristan (the middle brother, who also went to the war, and feels responsible for not having protected his brother) comes back home from the war and takes up with Susannah. The oldest brother, Aidan Quinn, is jealous because he wants her, too.

Putting aside the obvious question of, “Are there no other women in this damn town?” this movie captivated 24-year-old me’s imagination like few before or after it. It’s no secret that I’m painfully, unrealistically, hopelessly romantic, and this movie hits so many of my buttons. Brad Pitt goes away (unattainable man) and Susannah feels she’ll never recover. Before he goes, Susannah tells him, “I’ll wait, however long it takes. I’ll wait for you forever.” (Swoon).

But Tristan is lost and broken after the war and his brother’s death, and he is finding himself by sailing around the world in a way that’s alluring and sexy only in a Brad Pitt movie with great cinematography, and would elicit only eye-rolls if your best friend told you about it on wine night. “Wait, what? He’s where now? Maybe if he’d gone to couples counseling with you I’d understand why you’re hanging on. But after a year of no contact, he sent you a stupid bracelet? From where? Girl, I can get you the same one on Etsy and let’s go on a cruise so you can get over this loser.”

Yeah, so he sends her a bracelet from some faraway land. Much of this part of the story is told in letters (more swoon), which I can recite from memory, since I’ve watched the movie so many times. The one that can mist me up immediately is the one Tristan sends Susannah: “All is lost as I am lost. Marry another.”‘

But she said forever! And in movies that means forever, despite his admittedly douchey brush-off. I am on Team Tristan as a viewer of this movie, although I’d definitely advise any friend in a similar predicament to kick this guy to the curb and focus on her career and maybe get a new haircut.

As I get older, I find a wider disconnect between the me who loves Tristan, and the me who believes in autonomous, independent, self-confident, won’t-put-up-with-bullshit women. Tristan is endlessly fascinating to me in the movie, but I hope I’d know to avoid him like the plague at this stage of my life, although I’ve had my own-Tristan-esque hopeless situations that have brought me nothing but pain and sadness. What is the thing that makes a person want to hold on? It’s so unromantic to recognize the truth that people stay in painful situations when they don’t believe they deserve better.

Tristan comes back, of course, but now it’s years later, and Susannah has married the oldest brother, the Aidan Quinn character, safe, dependable Aidan Quinn. (Thanksgiving at that house, amirite?). When he first gets back, he goes to see Susannah. She’s wearing the bracelet he sent all those years ago when she thought he was lost forever. (Issues in that marriage?). She tries to give it back. Tristan says, “They told me this was magic. They told me whoever wore it would be protected. Keep it.”

And she says, “Forever turned out to be too long, Tristan.”

This line has the power to reduce me to tears every time, because I am the kind of woman who wants to believe that forever cannot ever turn out to be too long. That love endures, and finds a way, and stretches but doesn’t break. That it hurts sometimes, but it pulls two people irresistibly toward each other, even against all odds, against all hope. But, of course, that’s Brad Pitt movie love. In real life, love is sensible and shows up for a dinner reservation on time. It’s hard to call those two things the same thing, the mortgage paying love with the “letting-you-know-I-will-always-think-of-you-even-though-I’m-far-away-and-all-is-doomed” bracelet sending Love with a capital L.

And, frankly, I wouldn’t want that kind of love, the wistful, painful, never-gonna-work love. I want the healthy kind, the steady kind. But, well, that just doesn’t make for very interesting stories, I suppose. So Tristan continues to live in my imagination even while I’d send him packing in real life.

Anyway, so I guess this is a long-winded way of telling you: I’m writing a romance novel under a pen name. To get my “forever turned out to be too long” fix without nearly as much crying. There, I said it. 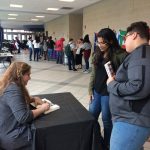