I had two teachers who changed my life: one was my high school English teacher, who had such an exuberant, quirky way of bringing literature to life (think: teaching Grendel with puppets to impenetrable high school girls until they smiled). The other was my Biology and, later, my Anatomy and Physiology teacher, Mrs. Graves. “Yes, ladies, that’s ‘Graves,’ as in the ground, which is where you’ll be if you don’t give your all in my class,” she told us on our first day, as we stared, wide-eyed, a room full of terrified freshmen. I’d never before met someone with such exacting standards, who expected so much of me.

Mrs. Graves was probably younger at the time than I am now. Our gag was created at that moment in life when everything is suspended, as if in air, and life feels eternal and endless, a time when you feel like youth is earned, somehow. To be sixteen or seventeen, as we were then, felt like a royal title bestowed, a birthright. Our bellies were flat because we deserved it and so they would always be. We could gently poke our good-natured teacher because we half believed the joke would never apply to us. We were going to be young forever.

Last night was my thirtieth high school reunion. Truth be told, I had not looked forward to going. On our 20th, we’d met informally at a bar. My hair was blond, and I’d just published my first piece in Newsweek after a long stint of trying, but failing, to publish, then getting sidelined by having and raising kids. I felt good about my body, and if reunions are a way that we measure the passage of time, I felt I’d stack up fairly well. My beloved English teacher, she of Grendel puppet fame, still lived in the area, and showed up.

But ten years changed a lot for me. My English teacher, who was just ten years older than we are, died of a rare disease. My divorce, on whose precipice I was teetering at the time of the last reunion, is now nine years in the past. My children are practically grown, my daughter leaving for college in the fall. But, probably hardest of all, my forties have been tough on my body, and my view of it. As the old pictures my friends started posting in the lead-up to the reunion reminded me, I’d once been really cute, size 4, belly-baring hot. Now I was… not. Now I was middle-aged. I didn’t know if I wanted them seeing me this way.

I put off paying for my ticket. Finally, my bestie from high school, who is still a dear friend, called me and basically told me that not going was not an option. We were a small graduating class – 50-something girls in our all-girls school – and my absence would be noticed. I Venmo’ed my money to the organizer, and hoped for the best.

My daughter picked out a dress for me, and gave me a tutorial on under-eye concealer, as if I hadn’t been obsessively studying Vogue make-up tips since I was younger than she is. But, you see, I am now the one who is just this side of old as dirt, and who’s to know what the oldsters know? I mean, I grew up without cell phones and on-demand video. I’m lucky I even know what concealer is, in her mind. I curled my hair, a far cry from the hair-sprayed architecture my 80s locks, but still cute. I put on a jacket over my dress to cover my fat arms.

I met my bestie in the parking lot, and we walked in together. We made our way to the back room which we’d reserved for the get-together. It was almost full, although we were just ten minutes late. There wasn’t a face I didn’t recognize (we were, as mentioned, a tiny Catholic school), and I was surprised when the first person to spot me threw her arms around me and said, “It’s so good to see you.” We walked around the room, giving everyone a hug, even the girls from the other “clique” who’d listened to different music and hung out in different spots after school. Thirty years washes away a lot of things you once thought mattered.

I was surprised and a little overwhelmed by the emotion of seeing these women. They were, like me, decidedly middle-aged. Beautiful, and put together, but not the coltish girls I’d once known. They talked about children and high property taxes and hot flashes, not about the D.J.s we’d get for the next high school dance and how to sneak a cigarette after school. At one point, we were all sitting at a table and decided to walk over to the coffee table. When we got up simultaneously, we all let out one physical complaint or another – a sore back, shoes that pinched – and then we laughed. We weren’t eighteen anymore, but we were in it together.

As the night went on, I found my spirits lifting. These were women with whom I could speak in a kind of shorthand. Remember the vice-principal coming on the intercom yelling about a boy being in the driveway? Yes. Remember the time we snuck alcohol into the locker room just to prove to ourselves we could? Yes. Remember this trip, or that, remember the nuns, and the NunMobile, and the trip to Great Adventure? When someone asked if anyone remembered the old HRA song, and I sang it word for word, the room erupted in clapping. (God help me, I think there’s video of my tone-deaf rendition). I’d been endlessly free, once, with these girls, I’d believed that it was all possible. Being with the women who were there made those years real again.

An old classmate with whom I was not particularly close back in school came up to me and held my hand warmly, and told me that she’d read my book, and loved it. I was taken aback by that. It hadn’t occurred to me that any of them had, or would even know about it. The book was inspired by events that happened when I knew them, but which I kept from even my closest friends out of shame, and fear, and a desire to belong. She spoke so warmly, and hugged me, and told me she was so sorry that I’d been going through all that when we were in school together. “I hope I was kind,” she said. Her hair was short, just growing back after chemo, and my heart swelled with love for her, with gratitude at having my life just graze hers. We are given all these treasures, throughout our lives, and most of the time we don’t even think to shake off the dust to see them in all their splendor. (PS – yes, B, you were always kind. Thank you for that). 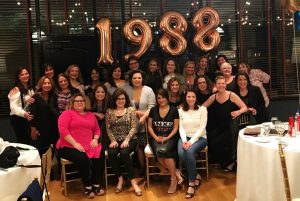 I was dumb to dread going to see these women. Rather than making me feel down about the passage of time, they helped me celebrate it, watch it, hold it for what it is, and release it. I am both the girl I was with them, the vain, scared, cocky, modeling club-obsessed child, and the woman who has thirty years of divorce and child rearing and work and disappointment and success beyond dreams behind me. One does not obviate the other. They are all part of my many incarnations. For one shining night, the girls of Holy Rosary Academy helped me remember that.

Happy 30th reunion, you fabulous women. It was truly my honor to share the years we did. I hope I see you soon, but if I don’t: see you in 2028. 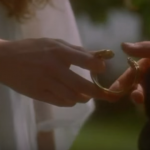