It is said that mothers shouldn’t play favorites, not even cat mothers. If that’s the case, I am probably a bad mother. And, well, maybe something of a crazy cat lady.

When it became apparent, in my late thirties, that my marriage was going to fall apart, I had a curious reaction. (Well, I had several, some more self-destructive than others, but let’s go ahead and just talk about the one). I began collecting pets. My son asked for a turtle, and where he’d have gotten a firm redirection under ordinary circumstances, instead he got… a turtle. I bought dogs, which found their way to my mom’s house while I traveled for business, and then managed to stay.

I bought a cat, pristine, perfect, pure-bred. Ever since my Lady and the Tramp days I’d been fascinated by Siamese cats, with their strikingly unusual eyes and regal bearing. The deal was sealed when I visited someone (I can’t remember who it was, now), who walked around with his Siamese cat on his shoulder. “They’re like dogs,” his wife told me, and I was sold. A dog-like creature that knows how to poop in a box and be clean about it? Sign me up. I bought one, and, a few weeks later, I bought another. They were gorgeous, one dark (chocolate point, it’s called) and one light (lilac point). I named them after favorite literary characters – Hermione and Katniss – and felt delighted with myself.

The fever broke some time after that. I did enough work on myself to realize that what was happening was that I was mourning the idea of never having any more children – things to care for – and I made my peace with that,  slowly, over many years. I stopped trolling Petfinder when I was feeling lonely. Two perfect little bookend cats was all I needed. I had made it through my somewhat strange coping mechanism without qualifying for a show that includes an intervention. I was a content cat mom. They were so perfect, you see, so well-bred, with registry papers and impressive lineages (and the price tag to prove it). If they’d been replacement children, they were the equivalent of Harvard-bound violin prodigies. Perfect. Appropriately impressive to visitors. For years, they were all I needed.

It was sometime in the fall of the year before last that I saw a post about a kitten on my town’s email list. It’s a place where we all post about local concerns, big and small: garage sales and city council elections, requests for recommendations for plumbers and landscapers. The post was simple: kitten needs a home. It had been a whole litter, but there was just one left. The last, unwanted kitten.

I wasn’t shopping for a cat, but curiosity got the best of me. I clicked in to her picture. She was tiny, as kittens are, and jet black. Her yellow eyes looked somewhat crossed. That had to be the angle, right? On an impulse, I wrote to the lady: If no one has spoken for the cat, I’d love to come meet her. The reply was swift: come on over! I’d told myself I’d keep it from the kids, lest I decide I didn’t want to bring her home after all, but I wasn’t able to control myself. Off we headed, the three of us, to check this leftover kitten out.

She was tiny, with a pathetic little squeak of a meow, and wouldn’t stand still long enough for any of us to play with her. She was like a bullet, zooming around the living room. The man pointed with one of those little cat lights that kittens chase, and she ran around comically, a little frantic. I had to have her. They eagerly packed her up for us, threw in some food and an extra litter box, and sent us on our way.

When we got her home, this cat – as yet unnamed – went totally nuts. She started climbing anything vertical: the back of the couch (plus the sides and the front). She discovered a fierce opponent – her reflection in the mirror – and did extensive battle with it. I wondered if I’d gotten a dud of a cat. She was crazy, completely inexhaustible, a non-stop squeaky toy on crack.

The next morning, as I observed her, I noticed she scratched herself a lot. I turned her over and looked at her belly. She had fleas. She was too young for the chemical treatments, so I had to embark on a bathing regimen that left my wrists shredded by her razor-sharp claws and her deeply unhappy and staring at me with accusatory – and definitely (slightly!) – crossed yellow eyes. She held grudges. She did bad things. She galloped behind me everywhere I went. She meowed so comically that it was like she was putting on a show. A few friends expressed horror. A black cat? Didn’t I know they were bad luck? I laughed, but her utterly nutty behavior made me wonder if I hadn’t brought a smidge of the crazy home.

She was fearless. My two regal (and now terrified) purebreds had been easily trained away from going into the bedrooms, with one negative experience of being shooed out. This kitten would not be deterred. As soon as she noticed I’d close the door behind me when I went in my bedroom, she perfected a technique of running between my legs ahead of me before I could stop her. Where my other cats could be easily intimidated out from under my bed with a few well-delivered verbal threats, the black cat looked at me impassively, carefully moving just out of reach when I swung a shirt at her, waiting perfectly in the center where she quickly realized I couldn’t reach. No matter how many times it happened, it never deterred her from trying again next time. She left on her own timetable, not scared off, but bored by the game.

She was without a name for several days while my kids and I mulled it over. I wanted something grandiose, preferably literary, although not necessarily. Maleficent. Hecate. I lobbied hard for Bellatrix, of Harry Potter fame. The kids weren’t having it. We settled on Boo. It meant something different to each of us: my daughter thought of it as “my boo,” the slang of endearment. My son thought of her as the irresistible child character in Monsters, Inc. And I thought it was a fun statement on the fear that black cats often inspire. She was the least scary thing I’d ever met in my life. The name was perfect for her immediately.

Boo grew, and with it her personality. She claimed certain spots for herself. She jumped up on counters her adoptive sisters would not or could not reach. She hung out. She wormed her way into being allowed in my son’s bedroom by sheer cuteness alone. “She’s okay, Ma, it’s fine. She just sits with me.” When my son went to school, she’s sit outside his bedroom door and cry mournfully, asking to be let in. She slept with her little face nuzzled in my neck or the crook of my elbow. As she got older and lost the desire to bury her face in a safe spot of flesh, she still came to keep me company in my office as I wrote, sometimes on my lap, sometimes on my desk. For entertainment, she sat on the windowsill and dreamed of the world. 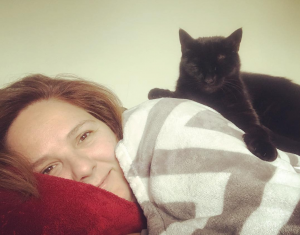 So, yes, I still love my two older cats. But this tiny, dark thing, the last one left, the one that no one else wanted and brought trouble right from the start, she made a special place for herself. She insisted on being seen, on having her way, on letting her freak flag fly. Was it because I saw some of my own self in her: not supposed to be here, but damned if she wasn’t going to make the best of it? Maybe. I have a soft spot for underdogs and the ones whose charms others don’t see. I give the villains the benefit of the doubt and am always suspicious of the point of view of whomever gets to tell the story. Was Maleficent really that bad, or just the victim of bad P.R.? Was this wild little puff of fur really someone no one else should have wanted? Absolutely not. Everyone else who passed her by failed to take a closer look, and see the ferocity of her uniqueness. Better for me. They gave me a chance to meet and share space with one of the coolest creatures I’ve ever known. My Boo. And that was pretty lucky.

This website uses cookies to improve your experience while you navigate through the website. Out of these cookies, the cookies that are categorized as necessary are stored on your browser as they are essential for the working of basic functionalities of the website. We also use third-party cookies that help us analyze and understand how you use this website. These cookies will be stored in your browser only with your consent. You also have the option to opt-out of these cookies. But opting out of some of these cookies may have an effect on your browsing experience.
Necessary Always Enabled
Necessary cookies are absolutely essential for the website to function properly. This category only includes cookies that ensures basic functionalities and security features of the website. These cookies do not store any personal information.
Non-necessary
Any cookies that may not be particularly necessary for the website to function and is used specifically to collect user personal data via analytics, ads, other embedded contents are termed as non-necessary cookies. It is mandatory to procure user consent prior to running these cookies on your website.
SAVE & ACCEPT
I am meWriting

Dark have been my dreams of lateWriting