Full disclosure: this phrase is kicking around my head lately because my son made one request for his birthday celebration: that we watch one of the Lord of the Rings movies with him. There I was, trying to figure out how elves intersect with orcs, and one character, a king, uttered, “Dark have been my dreams of late.” I really couldn’t tell you what his dark dreams were, honestly, or how they related to the plot, but the poetry of the line grabbed me immediately, with its vaguely Shakespearean grandeur and its old construction. 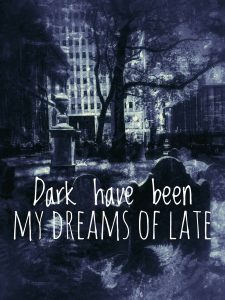 I even made an Instagram post for it, using one of the pictures of some Colonial-era graves in St. Paul’s Church in New York City, snapped recently on a walking tour of lower Manhattan. (My kids left yesterday on their three-week-long vacation with their dad, so I’ve got some free time on my hands). But then I figured if I just posted this grim-sounding line with a cemetery in the background on my Instagram account, some people might wonder if an intervention was in order. Here, where I can be as wordy as I like, I can post it for its aesthetic value and chatter on about it without alarming too many readers. I hope. (Really, I’m totally fine. I just think this line is beautiful and old headstones are amazing).

Anyway, so thinking about this gorgeous line, I began to wonder what attracted me to it so. Could it be just its beauty, its melodic, haunting quality? Yes, I think, that’s the crux of its appeal to me. But there’s this other thing, too: I dream a lot. And my dreams are almost always dark. It is a rare night that I don’t bolt up in the middle of it, heart pounding, the memory of a screeching harpy that was about to eat my head still as real as my slowly-materializing bedroom. So, yeah, dark have been my dreams of late.

But, then, they’ve always been that way. I have a distinct memory of a dream I had in my early teens, which took place next to a pool at the top of the Empire State Building in a weird, partially two-dimensional world (just so you know, there’s no pool at the top of the Empire State Building). I can still visualize that scene, although time has erased what particular horror was about to befall me in this imaginary (and impractically-placed) body of water. I can remember a lot of nightmare locations, as real as places I’ve visited. There have been many times I’ve woken up and felt that I was leaving the real world, and coming back to this fictitious and more staid place where I only sometimes visit.

The dreams are dark and insistent enough that I often fight sleep, like a fussy toddler. I read until my eyelids won’t stay up anymore, and I lie to myself that I’ll just rest my eyes for a minute, only to wake up with a start, my phone resting on my chest in the middle of the night. Or I watch T.V. until sleep takes me, trying always to stay up just one scene more. And, yes, I’m aware of the circular problem with that approach: the more noise and distraction I let into my pre-sleep time, the worse I’ll sleep. But the stark terror of the moments before sleep is such that it’s a risk I’m willing to take. It never looks quite as bleak as in the dark before sleep comes.

For a long time, I thought this was how sleep was for most people. Not my ex-husband, of course, who slept like he’d been drugged with something really strong and fast-acting, or my kids, too young and pure to have enough to be scared of. But everyone else. Eventually I learned that, nope, most people like sleep, and sleep well, if somewhat less as years wear on.

So I’ve been left to ponder the function of my complicated relationship with sleep. Obviously humans need rest, and resting badly probably isn’t good for me. And it’s not like I’m getting amazing plots from these hauntings: they’re usually just sketches of dread, not fully-fleshed out plot lines. But I suppose there’s some literary value in being confronted with abject fear over and over again. Stories are nothing more than engines of change for characters, and change often brings scary things with it. Becoming intimately acquainted with the many faces of danger, and fear, must work some muscle my brain wants worked.

In a weird way, I’m sort of used to these feelings. Like other things that have been hard in my life, it’s not like I choose them, exactly, but that I try to mine them for value and growth. And if the day should come when I can no longer say, “Dark have been my dreams of late,” I’ll be pretty happy with that, too. 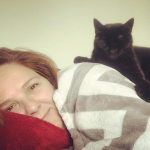