I didn’t have plans to go in the garden so early in the season.  But on my way home from Sunday brunch the air was so balmy and beautiful I couldn’t make myself go inside.  So instead I looked at the bearded irises.  Brave little plants!  All but one was sending up tiny green shoots.  (The tulips, too, are about 4 inches tall by now.  Oh, deer, please stay away).   The one that wasn’t sending up shoots was dried up… dead.  I pulled it out and wondered why, when the one next to it was vibrantly green and alive.  Was it because it was in a container?  (But no, so was the other one).  I could only conclude that is was one of the smaller ones I planted, so it probably came to me less healthy than the others.  And, in perspective, of 104 rhizomes I planted last fall, losing one is less than 1% loss.

I noticed that the snow and general winter-i-ness had pushed a bunch of dirt and mulch over some of the rhizomes.  I systematically pushed it away while clearing away leaves and debris.  Some sort of rotted old leaves came away easily.  Quick freak out… had my rhizomes died over the winter?  Were they in too much clay?  Moisture?  Did I not prepare the beds right?  A couple seemed to have this weird water trapped inside the leaves.  I cut those away.  I had to push a few back in to the ground where winter had jostled them a bit.  I poked them all one by one and they seem firm, fine.  I want them so much to grow happy.  I cleaned up around the beds, then got some nice help from my son and his playdate as they raked and picked up leaves.  Voluntarily!  Spring sure brings out the best in everyone.

Later, at night, I obsessed about bearded iris season.  About 8 more weeks until bloom.  Hurry up, flowers!  (I hate waiting).  I read up on what I could do to make them healthier, although I’ve been growing iris for years and I have Googled this very thing a thousand times before.  I ordered some iris-specific fertilizer from Schreiners.  I made a note for payday to order beneficial nematodes to guard against grubs.  Plus some alfalfa.  Then I remembered I have some dried, ground alfalfa leaves that I bought to make tea but then didn’t when the damn cupboard moths got in it.  In the dark, I decided to go outside and sprinkle it around the base of the rhizomes.  Please, Kathy from across the street, don’t look outside now because I must really look nutty crouching down around my flowers in the pitch black. 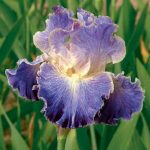